So, you’re writing a classic interwar pulp scenario to play with your favourite rules. Or you’re just reading one of the great pulp stories for inspiration… what about a soundtrack to listen to at the same time?
END_OF_DOCUMENT_TOKEN_TO_BE_REPLACED After running last year’s .45 Adventures convention scenario at least six times, it was time to retire it. Few things worse than a bored gamemaster, trust me.

So this year’s convention scenario is going to be a two-act thing (two smaller scenarios instead of one larger one), and because my mind works in strange ways sometimes, the first thing I’ve finished is another “Fighting Tales” faux cover. (First three together here)

The rest of the scenario should be finished, first draft at least, this weekend, then it’s a playtest and on to it’s first public showing at GottaCon 2011, 4-6 Feb.

There’s been previous versions of this tutorial posted on Lead Adventure and the Speakeasy, but I figured it’s worth reposting here.

After killing a dress shirt (black ink leaking does that to white cotton) I realized it would work nicely as material for a large safari/expedition tent. I used a CD as the base, with small blobs of milliput holding long toothpicks vertically as the poles — three on the front, three on the back. After the putty holding the poles was dry (and reinforced with a bit of superglue) I wrapped thick sewing thread around the tips of the poles, with a dab of superglue holding it in place and a bit more superglue stiffening the thread after it was secured. The fabric was cut twice as tall as it needed to be, and draped over the thread at the tops of each wall, with a generous layer of white glue on the inside of each piece. The walls were folded over, squeezed together and held whilst drying by clothspegs. The removable roof was made by first draping a piece of plastic wrap over the tent walls, then carefully folding and pinning the piece of glue-soaked cotton into position. I folded the eves up and trimmed them after the first coat of glue was dry, and it fits well; between the glue and the folding it’s more than rigid enough to hold it’s shape.

There’s an extra piece of cotton to form the floor, and most of the interior furniture is made of offcuts of basswood and styrene, with putty for the blanket and pillow. The maps were found on the internet, shrunk to appropriate tiny sizes, and printed out. The red coffee mug in the centre of the large map is a scrap of round styrene.

I’ve still got a good sized piece of this shirt; eventually more of it will live again as smaller tents to accompany this one. Recycling — it doesn’t just involve a blue bin, you know. Not for wargamers, anyway!

Some graphics inspired by interwar pulp magazine covers. Done in Inkscape primarily, with some of the photos manipulated first in GIMP.
END_OF_DOCUMENT_TOKEN_TO_BE_REPLACED

In 1933, according to Popular Mechanics, there was the Seagull, which “…skims water at seventy miles an hour.”

In 28mm resin, in the present day, we have this:

Painted and lightly modified back in 2009 by myself, produced by the eccentric and excellent Tobsen77 from Germany. The paintjob is inspired equally by classic wood-and-white yachts and the gleaming metal of The Spirit of Saint Louis and other 20s/30s projects.

It still hasn’t appeared in a game, actually. One of these days it will, possibly as the one-man escape craft of a dashing-but-dastardly Leader of the Evil Conspiracy. Can’t you just picture it zooming away from a dock, leaving hapless minions and frustrated pursuers equally behind?

(My take on the Seagull has previously appeared on Lead Adventure and elsewhere, but heck, it deserves another moment to itself.)

Some links of interest to pulp wargamers. An ongoing project; I’ll bump it back to the top of the posts when it gets updated and expanded!
END_OF_DOCUMENT_TOKEN_TO_BE_REPLACED

Rattrap Production’s .45 Adventures has an excellent supplement called “Valley of the Thunder Lizard”, filled with dinosaurs, dino-men, Neanderthals and other Lost World fodder. It’s definitely my favourite 45A supplement, and it sees a lot of use in our 45A games.
END_OF_DOCUMENT_TOKEN_TO_BE_REPLACED

A while back, I made up a set of eight vehicle outlines, designed to be printed on Letter-sized business card blanks or regular cardstock and used alongside (or instead of) 28mm vehicles on the tabletop. That first set had small cars, light & heavy trucks, and a closed limousine. 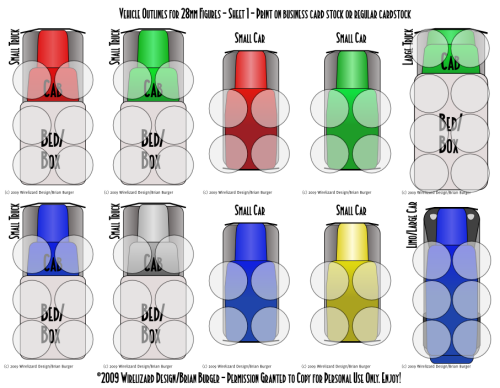 I’ve finally gotten off my duff and made up a second set of cards; this one has sporty roadsters (with and without rumble seats), larger sportscars, an open limousine, and motorcycles with and without sidecars. 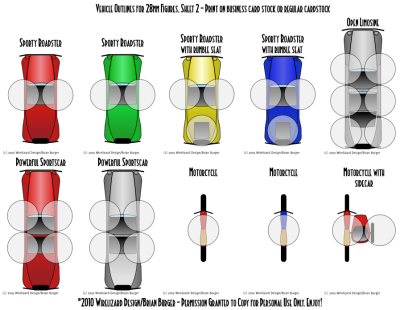 I have a set over on Flickr for all my pulp wargaming photos – check them out.
END_OF_DOCUMENT_TOKEN_TO_BE_REPLACED