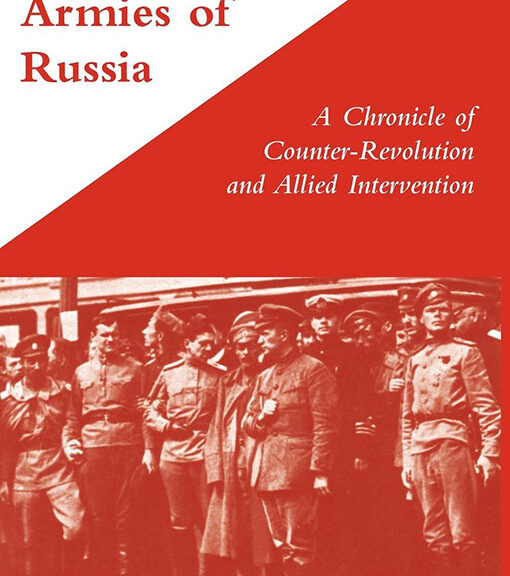 The White Armies of Russia: A Chronicle of Counter-Revolution and Allied Intervention by George Stewart is another modern reprint from Naval & Military Press, and was part of the same order I made to NMP back in April 2012. I’ve been reading it in fits and starts in between other books, but finally settled down to actually finish it about ten days ago.

White Armies was originally published in 1933, so it’s not a modern book, but it is still one of the touchstone pieces of Russian Civil War history in English. When I asked about this book over on the TooFatLardies mailing list, Richard of TFL mentioned paying quite a lot of money for an original edition a few years ago and being happy to pay it, but thankfully these days NMP’s facsimile edition is available relatively cheaply. The book is 470 pages or so, paperback, and seems solidly bound. The original photographs and maps are included, although quality of these (as NMP warns for all their facsimile editions) is not quite up to modern standards. This is especially frustrating on the maps, which are numerous and were apparently most drawn by the author or commissioned by him for the book. Many of the reprinted maps have a lot of barely readable tiny print, though, which makes them hard to use. That aside, in a conflict as sprawling as the RCW, it’s nice to have any sort of map to try to follow the action with!

The book is focused, as the title implies, almost exclusively on the actions and personalities of the White movement(s) in Russia, and on the various non-Russian groups that interacted with them — primarily the Czech Legions and the British, American, French and Japanese interventionist forces. Stewart has an obvious distaste for Bolshevism, but he pulls no punches describing the corruption, brutality and ultimate failure of the Whites.

The book is laid out roughly chronologically, starting with the first (February) Revolution and the beginnings of the counter-revolutionary movements and moving on from there. Each chronological section has, generally, a chapter on each of the main theatres of the RCW (Murmansk/Archangel/the North, the North-West, the Southern/Ukraine/Crimean, and Siberia, broadly speaking). This book design does make following a single theatre all the way through the war a bit of an exercise in hopping around in the book, but it’s hard to see how to avoid either chronological or geographic dislocation when attempting to tell the story of the entire RCW in one book.

The White Armies of Russia by George Stewart. 2009 NMP reprint, original publication 1933. £16.00 at NMP, less if you get it during one of their regular sales.

Given how focused White Armies is on the White experience, I’d be curious to hear recommendations from readers on a similar book focused on the Bolsheviks and Red Army, to fill in the gaps, so to speak. Suggestions in the comments, please!

A bit later than the Russian Revolution/Russian Civil War-era Russian history that I usually post about, but it overlaps so beautifully in our pulp interests here on the Warbard that I can’t resist. Behold, a poster urging Russians to build airships to glorify Lenin’s memory! Via Paul Malon’s Flickr account, where he posts all sorts of awesome scans, from Soviet propaganda like this to western consumer advertising. The graphic arts of the pre-WW2/post-Revolution early Soviet era was fascinating, all sorts of very creative things happening in Russia at the time, despite all the problems the country was facing. That creative modern art was actually one of the things that first got me interested in the interwar period and Russian history of the time, as back in college I had an art history teacher who had done her Master’s on Russian art and graphic design of that era and passed her enthusiasm on to her students.

Brian and I avoid most post-WW2 gaming as a general principle (we just don’t find it all that exciting) but the one part that holds any interest for me is retro-future post-Apocolypse ala Fallout. Given I am a sucker for cars, I picked up these two on a lark during one of my many runs to the second-hand store. They have been completely repainted. Enjoy!

Via (of all the random places) a MetaFilter discussion of WW1 flight sims, four zip files full of PDFs of public domain World War One flying books, about evenly split between period reference books and memoirs/biographies/autobiographies.

Handily, there’s a list of which titles are included in each zip file, so you could use that list, head over to the Internet Archive yourself, and pull individual titles of interest out for yourself.

Or grab the zip files, of course, and instantly have a pretty complete library of Great War aviation titles on your computer.