Last time I mentioned a couple of YouTube painters that had good series of to-the-point, well-edited painting videos. Victor Ques is another I should mention; his ongoing “Weekly Painting Tips” series just hit episode 100 and has lots of good content. For his 100th episode he did a really nice 15 minute video talking about when to use some of the techniques he and other painters talk about; it’s a really good overview to accompany the technique-specific videos he’s already done.

Painting Buddha doesn’t seem to be producing videos anymore, but they had a really high-end multiple camera setup, with a camera on the miniature, a camera on the palette (so you can see how colours are mixed and thinned) and a talking-head camera. Their painting black armour tutorial is well worth watching, even if it’s more advanced and involved than a lot of us are going to do regularly!

A few quick links to finish off with!

Bricks’n’Tiles is a small Windows program to create endless, seamless brick, tile, and other textures for creating paper or card buildings with, but even if you don’t use Windows or don’t feel like you need to buy the program, they have some sample sheets downloadable from their website that are potentially useful.

Free Islamic Calligraphy has a lot of high quality graphic files of Islamic calligraphy, including the awesomely sci-fi looking Kufic style. Lots of good stuff if you want to add some easy Islamic (or Haqqislamic, for Infinity players!) flavour to your scenery. 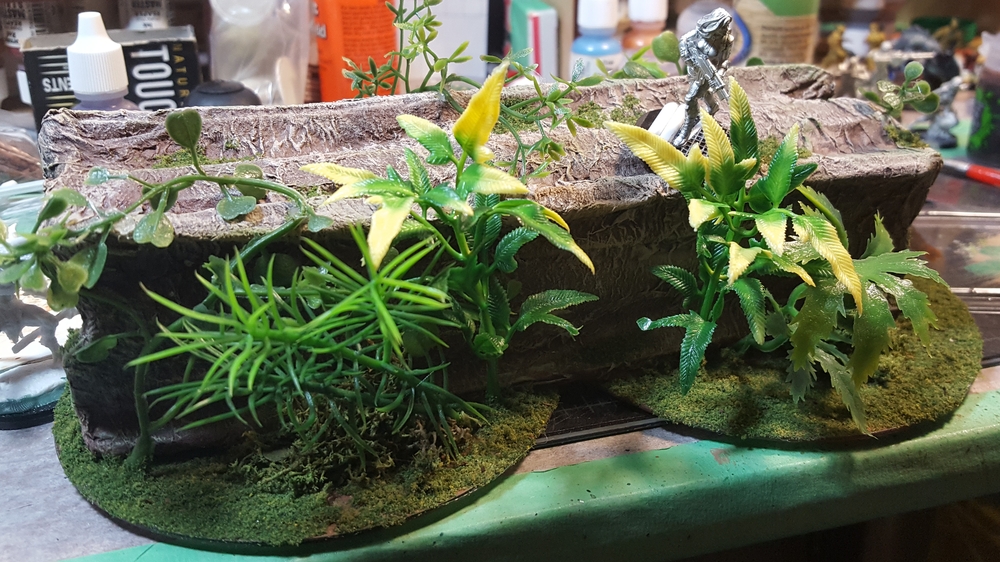 Scored another big paper towel roll from our recycling bin, so I decided to make a fallen tree instead of another upright one.

Like the other trees, the fallen tree started with a paper towel roll, scrap cardboard, some CDs, and my hot glue gun. I made the root ridges lower so the tree would sit mostly level, and glued on a few random bits of cardboard to break up the surface of the paper towel roll a bit. All the ridges are made of two strips of cardboard, so they’re a bit thicker.

I used a pair of CDs as a base, and didn’t bother filling in the gap between them.

Right after assembling the fallen tree (I love hot glue, there’s no waiting for glue to dry or cure!) I got to work with white glue, some paper towel, and toilet paper for bark texture. I filled in the two ends with scrap cardboard and a bunch of paper toweling, added some ridges of paper towel here and there, then covered the whole thing with toilet paper, pushed into place with a damp brush and sometimes my fingers, with extra white glue drizzled on as needed to make sure everything was well stuck down.

That needed to dry overnight, so the next evening I got the basecoat done, mostly brown paint with a bit of black and some tan to add a bit of variation, with a squirt of white glue mixed in for extra strength.

After the basecoat had dried overnight again, I did some drybrushing with tan and white paint to bring the bark texture out, then splodged on some green paint in two different shades here and there. That didn’t really need any drying time, so I got the hot glue gun out again and the box of random plastic plants and other greenery. I finished the fallen log off with a mixed batch of plants and foam, then ground foam grass over the base and here and there on the log as well, and declared it done!

The finished piece is about 9″ long, 3″ wide, and 2.5″ tall. I’m looking forward to adding it to my jungle themed tables!

Primer! Got the gondola spray-primed grey and the balloon envelope brush-primed black.

The LAF Build Something 2017 contest rules ask that you not post painting progress photos of your project past the priming stage, so this will be the last photo anyone sees of the Blomp itself for a while. I’ll try and remember to take some in-progress shots and save them for a post-contest photo gallery, though.

Up next is finishing the base with a bit more putty and then paint and flocking, and then working on the half dozen or so goblins who are going to be crewing this thing!

Deadline is Feb 18th, which is coming up awfully fast!

Several years ago now I did a whole banker’s box full of jungle terrain, but it was all fairly low-lying stuff, thickets and bushes and that sort of thing.

I’ve always intended to add some bigger trees to the set, inspired by the nice trees DM Scotty does in this video…

Our paper towel dispensers at work are the large commercial models, and staff are expected to refill them on their own when they’re emptied, so I’ve brought home a few of the heavy cardboard tubes from the centres of the big rolls of brown paper towelling, as well as a couple of lighter tubes from home, and a few shorter toilet paper tubes.

This weekend I sat down to crank out a few trees! I started with the hot glue gun, the tubes, some CD-ROMs salvaged from the recycling bin, and some scrap cardboard to produce four trees and one big stump.

The three big trees and the stump basically fill the entire CD base edge to edge, with space between the buttress roots for figures to duck for cover. The smaller tree (from a tube that originally held glow-ropes) covers about half the CD it’s on.

I used lots of white glue to attach a layer of brown paper towel to the trunks, let that dry, then slapped on a base coat of reddish-brown and black mixed. After that dried I gave the trunks a heavy drybrush of tan, then blotches of two different shades of green here and there to suggest moss or jungle fungus.

After that had mostly dried I broke out my box of random plastic plants, gathered from craft stores over the last couple of years. Vines, random bushes, and some low-lying lichen filled some of the gaps around the trunks and provided some colour, then I put a generous layer of flock around the bases and declared these things done!

It’s nice to have a quick down-and-done project, sometimes, and I’m really pleased with how these all came together. Looking forward to getting them onto a table for a pulp or Infinity game!

Greenstuff all over the place this time!

I’ve started on the heavy leather harness that the troll uses to tow the Blomp along, as well as structural greenstuff to secure and cover the magnets in his base, hold the barrel in the right position, and secure the steel plate the barrel magnetizes to.

There’s at least one more round of greenstuff here, the front and belt parts of the troll’s harness don’t exist yet, and the base needs some more patching up.

Up on the gondola the various joints in the pipes have greenstuff seals added. I’ll be painting them up as leather, which has historically been used as a seal and still is to this day in some applications. I also smoothed out a few parts of the hull, and on the first photo above you can see the putty filling in the underside of the bridge wings to secure the three eye-bolts on each end.

The eye-bolts are jewelry making supplies, intended to be posts on earrings or something. I have a little baggie of dozens of them, and I think they’ll come in handy for all sorts of things – parts of railings, for example. It pays to cruise slowly down the random aisles of your local craft store, the jewelry and bead aisles are full of all sorts of interesting things!

The greenstuff work on the gondola means it’s finally ready for priming and painting. I didn’t get a photo but the fabric patchwork is also finished on the balloon, so painting will start on that this weekend. I also need to get stuck into the (mostly minor) conversions to the half dozen Reaper Bones goblins who will serve as crew!

The Feb 18th deadline looms like an irritated troll with a big club!