No, not the (very tasty!) drink, but White Russian Rifles from sometime in the Russian Civil War; the figures are 28mm from Brigade Games and very nice.

My Whites will, by the time you read this, have been fairly comprehensively beaten by an Irish medievel/Dark Ages warband with very, very nicely painted freehand shield designs, and Round Seven will be underway!

Week Five of the LAF’s Lead Painters League having just ended, here’s my entry. This was one of the bonus theme weeks; the bonus theme this time was “Africa”, with extra bonus points for producing an opposing team as well as your basic 5-figure entry.

I completely forgot about the extra bonus points for an opposing team, but that wouldn’t have mattered as I’ve no suitable figures anyway. I did manage to shoehorn the tropical British I’ve been painting in, as British and British Empire troops spent the entire length of the Great War chasing Paul von Lettow-Vorbek around various East African territories. They never caught him, he surrended shortly after the November 11 Armistice undefeated in the field.
END_OF_DOCUMENT_TOKEN_TO_BE_REPLACED

Rattrap Productions released the much-anticipated 2nd Edition of their .45 Adventures pulp adventure rules a few weeks ago, I received my copy of the full rules last week, and I’ve already run one convention game and several small private test games with the demo rules before even getting the full rules.

This review is mostly aimed at folks who have some familiarity with the 1st Edition of 45A, but it should be general enough to give those of you with no experience at all with the system an idea of how it works. Note that throughout this review I’ve used “45A1e” and “45A2e” for 1st & 2nd Edition respectively; this is a bit of a D&D-ism but useful shorthand!
END_OF_DOCUMENT_TOKEN_TO_BE_REPLACED

With getting ready for Trumpeter Salute taking up almost all of my gaming time the week before the convention, I didn’t manage to get a new entry finished for Round 4 of the Lead Painters League.

I re-ran Lord M Hosts A Weekend instead, and watched my fancy toffs perish under relentless Imperial bombardment – they got paired up with a rather nice (and new!) entry featuring Star Wars Imperial spaceships, including the Death Star itself, and a great disturbance in the Force was felt.

I’ve got a new entry in Round 5, live this week, though, and Rounds 6 & 7 already finished, photographed & submitted, so I have a bit of breathing room for the last three rounds, including the blowout Round 10 Movie scene bonus round!

OK, I’ve never actually been to Egypt. But it’s a classic in pulpish destinations (and the closely-related Lovecraftian/Cthulhuian destinations!) and while I’m obviously biased, I like how this luggage tag or sticker has come together.

Done in Inkscape, as usual. The design occurred to me while walking home from work one afternoon, and pretty much fell together once I got home and fired Inkscape up. I love it when inspiration strikes like that!

My Round Three entry for LAF’s Lead Painters League, more Pulp Figures sculpts. This time it’s the upper classes, with the PGJ-14 Upper Crust Swells pack providing five of the figures, and the PHP-18 Rugged Sons of Empire pack providing the Scotsman with shotgun and bald officer in mess uniform.

As a bonus, they’ve won their round, against a rather nice flotilla of Ground Zero Games’s FSE starships! As I’ve said before, I don’t take part in LPL with any serious expection of winning, just to get stuff painted and photographed and to force me to push myself as a painter. Winning is just gravy. Tasty, tasty gravy, though.

Here’s a narrated photo tour of Trumpeter Salute from my point of view.
END_OF_DOCUMENT_TOKEN_TO_BE_REPLACED 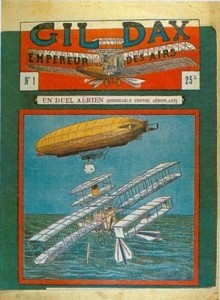 io9, source of much pulpy goodness such as the Tozo comic, has turned its attention to European pulp, covering the period from 1914 all the way through to the end of World War 2 in 1945. Oh the planetary romance, the zombies, and the rise of facism. All is covered within. Just check out the image to the right. It has zeppelins!