Every culture has dog/wolf demon things in their folklore. The UK is thick with them, it seems like every county has three or four varieties, and they show up everywhere else in Europe too. Usually huge, black, red-eyed, and inclined to eat people by dark of night or just bay (they never merely bark) threateningly on dark and misty nights.

With that in mind, adding some demonic dog-creatures to my “Weird ECW” skirmish seemed like a natural thing to do. Fortunately, Reaper Miniatures has a whole selection of suitable figures, so I sent some money to those nice folks in Texas and got a good selection of things back, of which this pack of extremely bad dogs is just the first part to be seen here!

The two left-hand figures are Hellhounds, the two slightly smaller beasts in the middle are Goblin Wolves, and the really, really big doggie on the far right there is Moor Hound.

They’re all on 40mm wide bases, just for scale, and the grey figure in the background is 28mm Warlord plastic.

Looking forward to getting these guys painted up and figuring out stats for them in Pulp Alley and the other rules sets we use! Somewhere in my mountain of unpainted figures I have at least one other big dog figure (a Reaper Warg, I think) that I can add to this pack when I find it. 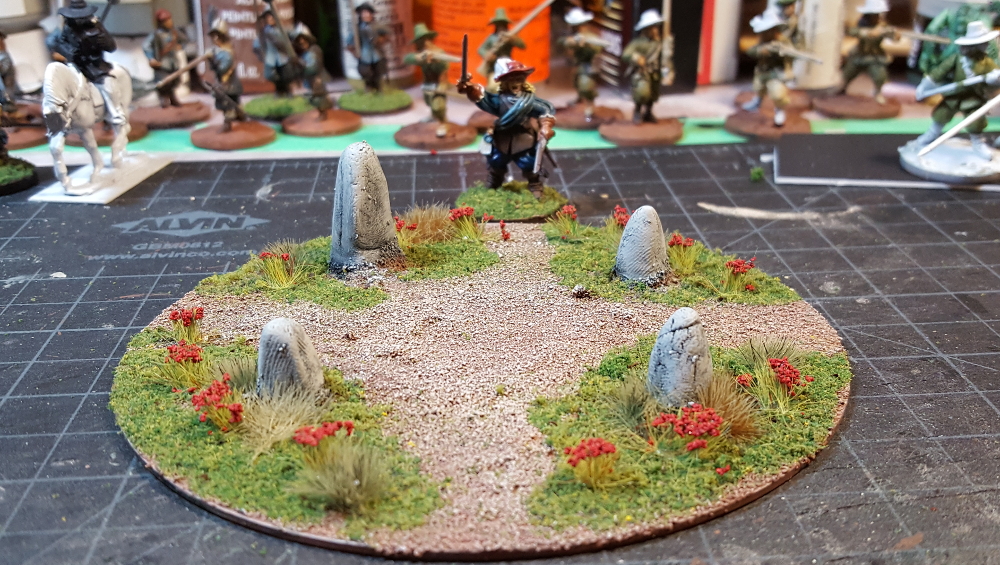 Not every stone circle is a gigantic trilithon monument like Stonehenge. Some of them might be barely recognizable as stone circles, in fact, until you realize that plants grown in strange patterns around the stones, or you wander past on certain very specific nights of the year…

This little project started out as a way to use up leftover putty; whenever I had excess greenstuff or Milliput I’d squish it into a rough stone shape and let it dry on one corner of my bench. This weekend I wanted a quick project as a distraction, so I grabbed four of these stones, hot-glued them to a scrap CD, and added sand. That got left to dry overnight, then I basecoated it dark brown, let that dry a few hours, and drybrushed the sand to bring up the texture with various shades of pale brown, tan, and very pale grey.

The stones got a black basecoat, the drybrushed with various shades of grey, tan, and finally white.

The flocked areas are my usual mix of ground foam and static grass, and then I added various tufts from Army Painter and the flowers from Rain City Hobbies. The flowers form a ring around the outside of the stones, and I kept the foliage inside the stones to a minimum.

My ongoing English Civil War project might well shade over into some sort of gunpowder fantasy version of the ECW or TYW, in which case the circle will be right at home, and in the meantime it can add a little touch of strangeness to some lonely corner of my tabletops… who meets in the centre of this flower’d circle, with it’s well-trodden paths? Be ye for King, Parliament… or some far older Power?!

Always interested in a new gaming system and being pen and paper roleplayers, Brian and I have been playing a little bit of Songs of Blades and Heroes recently. Like many of our gaming experiences, this one has been long delayed in coming but it was well worth the wait.

Our first game was a wonderful and thoroughly-illegally built three-way match involving two groups of Orcs and my Reaper Mouselings, his Dwarves and my Mouselings have had it out. The game is interesting and fun and very fast (we played three games on an hour and a half ferry ride) but has a few weak points.

Our current warbands are both tricked out minimum figures, maximum damage warbands. Neither has more than 7 figures, each worth at least two dozen points apiece. Hordes of zombies these are not. My mouselings have half their 300 point standard warband allotment between my mounted-on-an-owl, magic-using leprechaun leader, Shamus O’Reilly, and his familiar, Mossy, a captive stone golem with shooter(medium) and combat 5. Brian’s dwarves are just as nasty, with the two flanking dogs and a leader with Quality 2 and Combat 5.

A note about the game: In order to get units moving and fighting, you need to score successes by rolling at or above the quality on a d6. Combat is a simple oppposed d6 + Combat Value + modifiers. Lower Quality scores are better, higher Combat scores are better.

The game itself plays well, with some bad break points. Specifically, magic-users are useless as ranged combat figures, but deadly when they transfix. Combined with Mossy’s powerful combat and throwing ability, this gave my team a one-two killing “punch” that was hard to beat. Add in the dwarves (and mouselings) short-move and you can see where it will go wrong quickly. Where the dwarves beat me was when they were able to get their dogs around into my magic user (only combat 2) and made him move did things go badly.

And then there was the rout. Or maybe I should say “The Rout.” Brian apparently cannot roll combat rolls. I cannot roll quality checks to get people moving. These two phenomenmom manifested in one game where I never made it more than one or two short moves away from the table edge (basically less than 4″). When Brian got my leader to book it off the table, this triggered a morale roll every other warband member. Which I failed. And so my entire warband ran off the table. In a single turn.

In sum, We do enjoy playing the game, but I am not certain if its simplicities truly make me happy. We need to try some different warbands, including zombies, skeletons and cheap soldiers and see how that works.

And where are the pictures? I haven’t taken any and Brian didn’t either, so no pictures for all of you. Besides, we were playing with basically no scenery on a cafeteria table for most of our games, so they wouldn’t have been great photos anyway…

This is a repost of an old article from the original Warbard pages. – Corey

I’ve built most of a smallish fortress/castle, finally got enough finished to use in a game, and to show off here to update this page!

END_OF_DOCUMENT_TOKEN_TO_BE_REPLACED

I put the first of these buildings – the Short Tower – up on the site sometime around 2000, and for ten years they’ve been consistently popular. I think I’ve gotten more feedback on these (and some of the other cardboard/paper stuff I have available) than on anything the website’s ever hosted.
END_OF_DOCUMENT_TOKEN_TO_BE_REPLACED

More old photos resurrected – this time a few from a Fantasy Rules! 2nd Edition game we played years ago. Human medieval knights & footmen vs orcs and goblins with necromancer help. I’m pretty sure this was the first outing of Tony’s undead; years later he’s finally got enough to field an all-undead army without help from my figure collection.
END_OF_DOCUMENT_TOKEN_TO_BE_REPLACED

15mm fantasy figures, based for Hordes of The Things (HOTT) or Fantasy Rules! (FR!). Many of the figures are long-out-of-production Ral Partha 15mm (from when they held the AD&D license, before WotC bought AD&D from TSR and started producing plastic crap); the rest are a mix of Reaper & Ral Partha 25mm monsters and Chariot 15mm (now produced by Magister Militum/Navigator.
END_OF_DOCUMENT_TOKEN_TO_BE_REPLACED

END_OF_DOCUMENT_TOKEN_TO_BE_REPLACED

This is a battle report from the old Warbard – Corey

Tony wrote this battle report after our most recent FR! game, the first in which his Undead appeared.
—

“When an invading force crosses a river in its onward march, do not advance to meet it in midstream. It is best to let half the army get across and then deliver your attack” – Sun Tzu, The Art of War.

On Wednesday night, Brian, Mike, Darren and myself played out a 750 point FR! battle. Mike and I allied against Brian and Darren.

It was cool to finally get a game with some undead on the table. I had some lucky rolls, but overall I was pleased with how they played. They are pretty tough to kill (being undead and all), and demoralization is a waste of time. I did manage to summon one unit back, although it was rather difficult. I always find that few spells go through in FR! Part of it is that the army pool is always so much bigger than the second level magic users pool, so it is easier to dispell than cast.

It is tough to say where the battle was won or lost. I think that the western side where Mike was was decided by his massed archers. That gave him the ability to sit on the south shore of the river and fire arrows at the dwarves. That destroyed one unit, and broke up the line enough that his troops could get across the river. Also, Brian had a series of abysmal rally rolls…

On the eastern side, the early loss of the battlewagon was disheartening for the dwarves. They never really recovered from that. The skeletons were able to prevent the human villagers from attacking the flank, and managed to roll really well in combat. By the time the wolves were in striking distance, that part of the battle was already over, with only one dwarven unit left standing.

This is a battle report from the old Warbard – Corey

This is a battle report from this summer – I wrote it up for the Chipco List, but just found it again and realized I’d never HTML’d it. Here it is, then. Enjoy!

Had an interesting 3-way FR! fight last night – three 750pt low magic armies, racing to grab an ‘alien artefact’ that was in the center of the table in a stone circle.

The ‘Capture the Flag’ format works really well for more-than-two-player matchups. It was close and tense right until the end!

The armies this time were Dwarven, Medieval human, and Orc/goblin. First turn, the humans Flew a HW w/ Hero into the stone circle, grabbing the artefact. The rest of the forces raced toward the center, with Orc forces moving to block the human’s retreat.

The Orc wolves and wolfriders hit the flanks of teh human force, while the orc infantry and the dwarves faced off up on the central hill and the human HW w/ the artefact ran as hard as they could – the humans couldn’t manage another Flight spell.

The dwarven infantry blew away the orcs & goblins, swiftly reducing them to utter rout, but the humans deployed a few units in a screen to stop the dwarves, sacrificing them to get the HW w/ artefact marched off the table. Damned close – the humans left the table at One on the Morale Clock…

The Dwarves were left in possession of the field, but the humans had the powerful mystic artefact!

If you want to do multi-sided FR!, I really recommend trying the Capture the Thing idea – makes for a really good game.

The advantage of a “Capture the Flag” game is that it doesn’t make any sense to hang back – you either want to grab the ‘flag’ first, or go beat on the guy who grabbed the flag and grab it from him.

The other thing to do (ahem…) is have a beer with your game… puts you in that “charge…charge…charge!!” medieval frame of mind! If you’re running an actual Medieval army – knights and all – have two beers. (but not if you’re driving home right afterward, of course…)