Being a Kipling fan, I kept this when it came on one of the mailing lists I’m on, and decided to post it here. I have no idea who the original author is, but I didn’t write it, so if you know who did, please contact me so I can give credit where due! In the meantime, enjoy. — Brian

If yer painted with oils and washed with a brush,
If yer de-tail’s all crisp and yer parting-line’s flush,
Remember it don’t mean a tittle or tush
To the Man Who Writes The Rules

If yer coat’s painted red when it ought to be blue
An yer ‘at’s an off-color, yer skin’s a sick hue
It don’t matter a bit ‘ow some fool painted you
For you lives an you dies by the Rules.

If yer paint is all chinky from years o’ hard use
An yer bayonet’s gone an one arm’s hangin loose,
Yer as good as the next ‘un an’ just as much use,
To The Man Who Writes The Rules.

Oh he knows all the hist’ry, he thinks an’ he reads,
And what ‘e don’t know ‘e can fake if he needs,
‘E can tell you the pace of men, camels or steeds,
An’ the 2D morale o’ the mules.
He’s a Solomon wise with a sceptre an’ crown
He’s historian, mathematician and clown,
An he don’t care a whit (which is good!) for renown.
He’s The Man Who Writes The Rules.

If yer lined with a marker, or lined with a pen
Painted double-ought sable or camel-hair ten,
It’s one an’ the same when the dice roll again
For you lives an’ you dies by the Rules.

If yer base is magnetic, or coinage or card,
If yer pose is high port, or reloading, or guard,
If yer bought by the casting or bought by the yard,
It don’t mean a toss if yer plastic or hard
To The Man Who Writes The Rules.

On styrofoam hill or vermiculite plain
When the tape-measures whirr and the dice roll again,
An’ the pizza-smell’s thick, so’s to rattle yer brain,
It’s the Rules that permit, an’ the Rules that restrain,
And you lives an you dies by the Rules.

For the painter’s a grind and the gamer’s a plod;
The collector, ‘es just an obsessive old sod,
But I tell you, ‘es bloody well near to a God
Is The Man Who Writes The Rules.

Next Friday GottaCon 2011 opens here in Victoria, and a week today, Saturday the 5th, is my pulp adventure game, “The Amulet of Fire”.

I’ve just finished the Encounter Cards for both Acts of Amulet. Here’s a few of the possible Encounters for Act One, “The Missionary Position”: 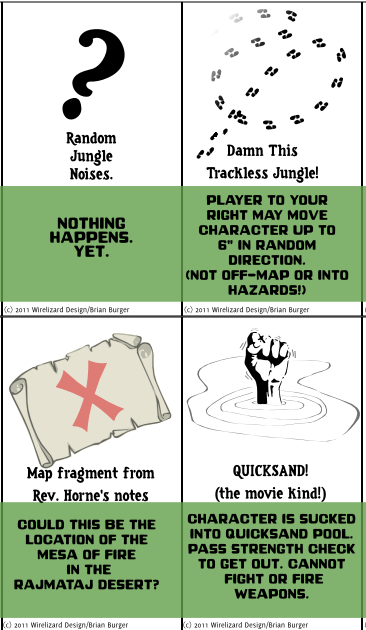 END_OF_DOCUMENT_TOKEN_TO_BE_REPLACED

The Orbiter meshes for the Percival Lovell and space stations were for a very old version of Orbiter and are not currently supported. Check out the Orbiter Hanger, Orbiter Forum, and main Orbiter page for more information about the latest in Orbiter.

As both Brian and I run Ubuntu these days, it is unlikely that any new development for Orbiter will happen, at least until Orbiter is finally Open Sourced and ported to OpenGL and Linux.

Another repost from the old site — Brian

This is a repost of an old article from the original Warbard pages. – Corey

I’ve built most of a smallish fortress/castle, finally got enough finished to use in a game, and to show off here to update this page!

END_OF_DOCUMENT_TOKEN_TO_BE_REPLACED

I’ve started to add URL redirection rules to the site, so hits on the 404 page should start dropping and more people should be redirected to actual useful content…

The 404 page has also been customized to explain the rebuild and offer some pointers on where to find things. We’ll keep an eye on the logs and keep adding redirects as needed! END_OF_DOCUMENT_TOKEN_TO_BE_REPLACED

I think I’ll have to try this – I have a few plastic palm trees, but more is never a bad thing: Pipe cleaner palm trees (via MiniatureWargaming.com)

I’ve posted these on various forums, but never collected them into one place before. For your amusement, a batch of fake 1930s ads – grab the full size versions off Flickr to reproduce for your personal use on the sides of buildings, on billboards, or whatever!
END_OF_DOCUMENT_TOKEN_TO_BE_REPLACED