These are my unofficial draft versions of character sheets for Rattrap’s .45 Adventure 2nd Edition; they use a vaguely period typewriter font for a somewhat pulpish look, and while the layout is still a work in progress they take up less space than the 1st Edition sheets.

Feedback, suggestions or comments below in the comments area, as always!

(Legal Garble: .45 Adventures is copyright Rattrap Productions. These sheets are copyright Brian Burger/Wirelizard Design, permission granted to copy for personal use only.)

Back in October 2009, near the beginning of this pulp craze of ours, I ran a game I called “Jurassic Pulp”, inspired by that T Rex vs SUV chase scene in the original Jurassic Park movie. We used Model Ts instead of SUVs, though, and they’re just a bit more fragile than a modern SUV. T Rex hasn’t changed, though!

A fairly complete report on that first game can be found over on Lead Adventure, including some post-game ideas from both Corey and I.

When we were kicking ideas around for a new .45 Adventure convention game, the idea of reviving Jurassic Pulp came up. I’ve started to run with it, END_OF_DOCUMENT_TOKEN_TO_BE_REPLACED

Another review of .45 Adventures 2nd Edition has come out, this one in The Ancible #9, a free-to-download PDF magazine.

I hadn’t actually grabbed a copy of The Ancible before, I have to admit. It started as a “real” paper magazine, I’m pretty sure, and when it switched to free PDFs I missed the memo! It bills itself as “a full colour digital magazine that specilises in the field of Science Fiction and fantasy wargaming” and it delivers — besides the 45A2e review in this edition there’s a long review & painting article on some giant Warmachine war wagon, a review of the new Battletech box set, another review of Heavy Gear: Arena, some interviews (great conversions in the interview with the Frenchwoman!) and a lot of advertising for all sorts of conventions, companies and such. Well worth checking out, I shall have to start grabbing the back issues and seeing what I missed.

The 45A2e review is longer than mine, with a nice introduction to the pulp gaming genre and more detail on specific game mechanics and such than mine. Go check it out, and the rest of The Ancible. Well worth it.

Rattrap Productions released the much-anticipated 2nd Edition of their .45 Adventures pulp adventure rules a few weeks ago, I received my copy of the full rules last week, and I’ve already run one convention game and several small private test games with the demo rules before even getting the full rules.

This review is mostly aimed at folks who have some familiarity with the 1st Edition of 45A, but it should be general enough to give those of you with no experience at all with the system an idea of how it works. Note that throughout this review I’ve used “45A1e” and “45A2e” for 1st & 2nd Edition respectively; this is a bit of a D&D-ism but useful shorthand!
END_OF_DOCUMENT_TOKEN_TO_BE_REPLACED

Here’s a narrated photo tour of Trumpeter Salute from my point of view.
END_OF_DOCUMENT_TOKEN_TO_BE_REPLACED

END_OF_DOCUMENT_TOKEN_TO_BE_REPLACED 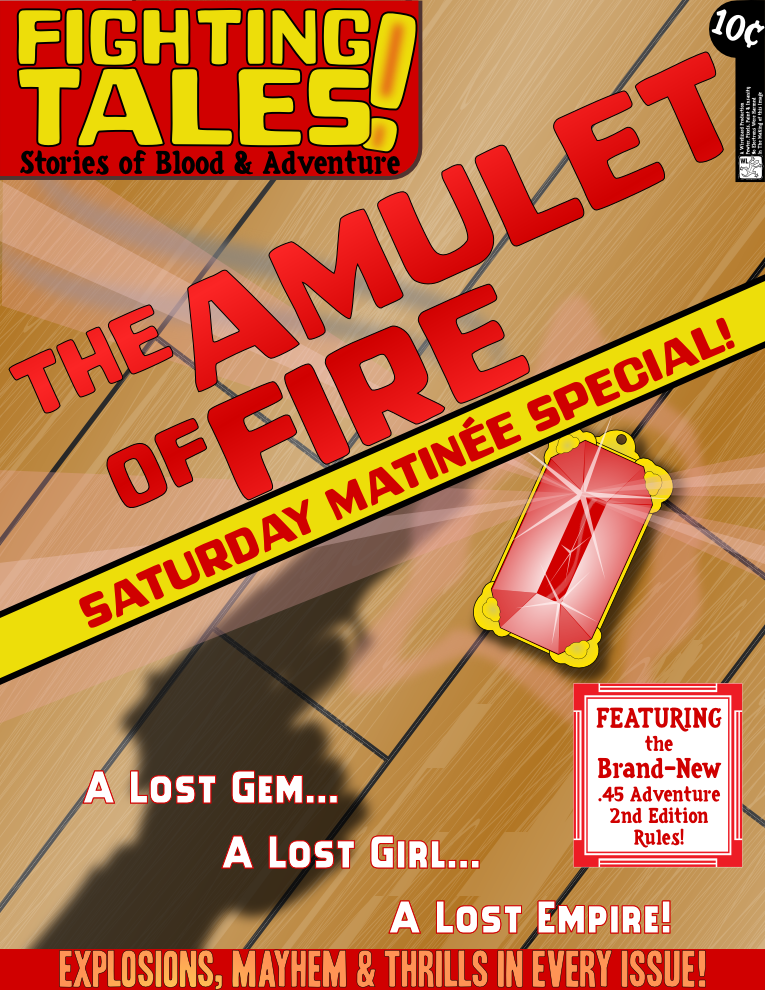