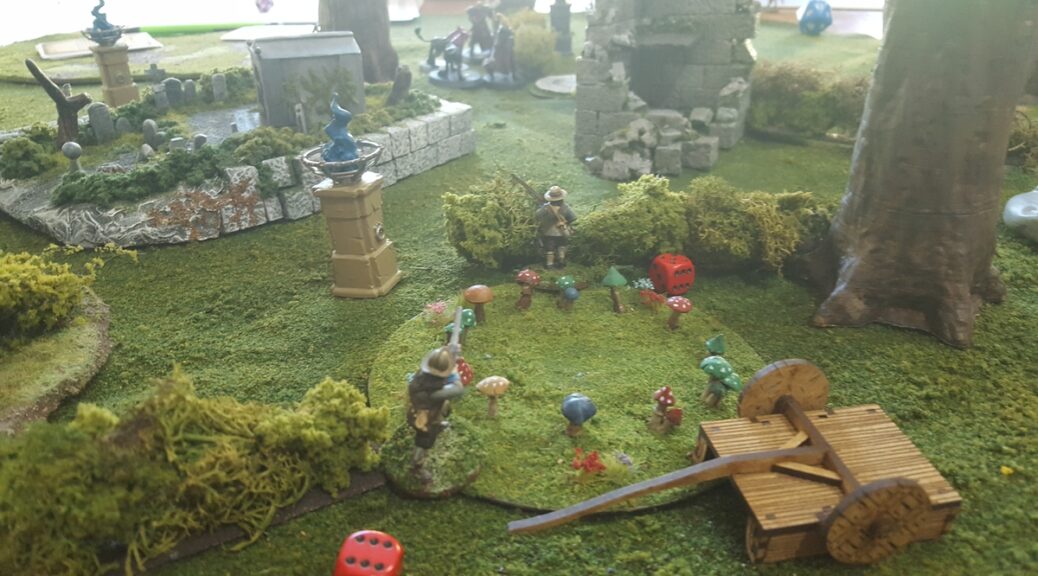 Locally our COVID-19 situation is such that we’re allowed to expand our pandemic pods slightly starting a few weeks ago, so myself, my brother Corey, and our friend Sean decided to do the pod thing so we could get some gaming in. Turns out it takes a goddamn global pandemic to get me back to regular weekly games, so that’s a thing.

I own the Frostgrave rulebook in actual physical dead tree format, and we were all able to grab ebook/PDF editions while Osprey was doing their giveaway a month or so ago, and all three of us own enough random figures to put together usable Frostgrave bands, so we set off!

We’re also ignoring the “frost” part of the Frostgrave setting, opting instead for overgrown forest stuff because that suits our existing terrain better. Hence “Forestgrave” instead of “Frostgrave”, then!

Today was our second game, and Corey came out ahead on experience with his wizard/apprentice pair getting more spells successfully cast than Sean and I managed combined. We ran the Ruined Keep scenario, with the four teleporter discs around the table. There was no teleporter action at all for the first half of the game, and then suddenly everyone was doing the teleport trot. I think all three of our wizards wound up with the extra experience points for taking a teleporter ride, actually.

We’ve decided that for next week’s game we are all going to roll up new wizard bands; now that we’ve had two games we’re all realizing there’s things we’d do differently for both warband composition and spell selection, and we want the chance to explore new setups especially among the huge list of spells available in Frostgrave.

We’ve got some new scenery on the way, too, with Corey working on more ruin pieces and hopefully getting his cranky 3d printer functional again. I want to start building some ruined towers for the Silent Tower scenario, but need to clear at least some of the current painting and building stuff out of the way first! 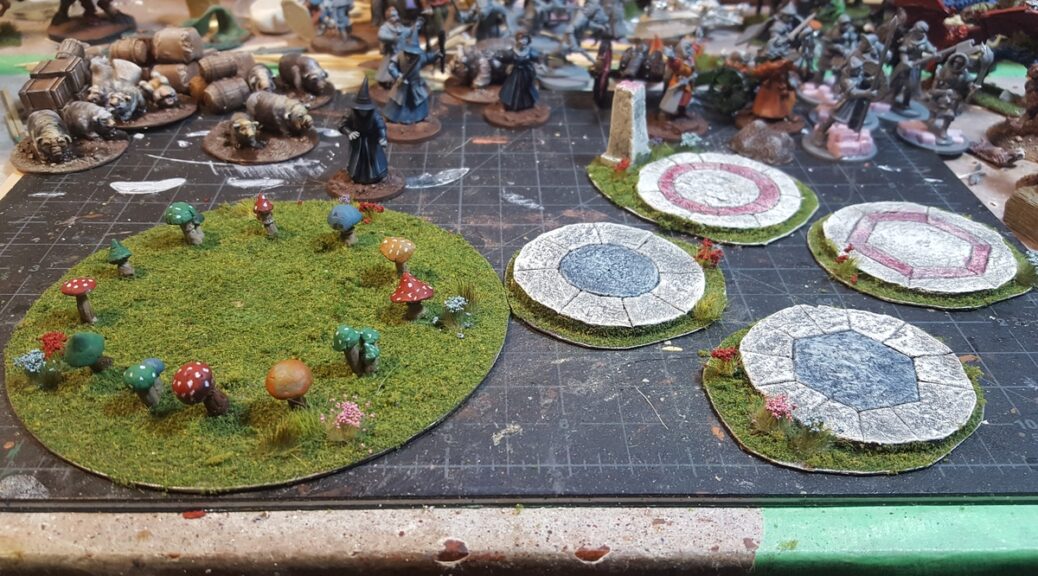 We had our first game of Frostgrave last night, for which I used a few of my 17th C/ECW figures, because why not? As usual, I managed not to get a single photograph during the game.

I’ve decided to go with a “Greengrave/Forestgrave” theme instead of the default Frost- part of Frostgrave, so that we can keep using our current scenery rather than starting from scratch with winter stuff.

One of the FG scenarios calls for a quartet of 2″ teleportation discs set up around the board, so I decided to whip those up today. The discs themselves are pink styrofoam, based on scraps of plastic card. Quick and easy scenery, a few hours from start to the current state shown here. They could well serve all sorts of purposes aside from just teleportation discs, and I’m sure they will.

The other piece I created today started with the resin mushrooms from Bad Squiddo games I got a few weeks ago. I’ve been painting them up whenever I have leftover paint, got them finished today while waiting for the discs above to dry, and decided to put together a really, really gnarly fairy ring that, even more so than most others, you really do not want to enter. That’s a 28mm Frostgrave witch on a 25mm base behind the fairy ring; most of the mushrooms/toadstools are at least waist high on a human.

This might feature as some sort of marker in a game eventually, but for now it’s just some colourful scatter terrain to fill in a blank spot on the table and possibly worry players!

We enjoyed our single game of Frostgrave so far, and I’ll try to get a couple of photos tomorrow while we also try to get fewer rules wrong on our second outing! 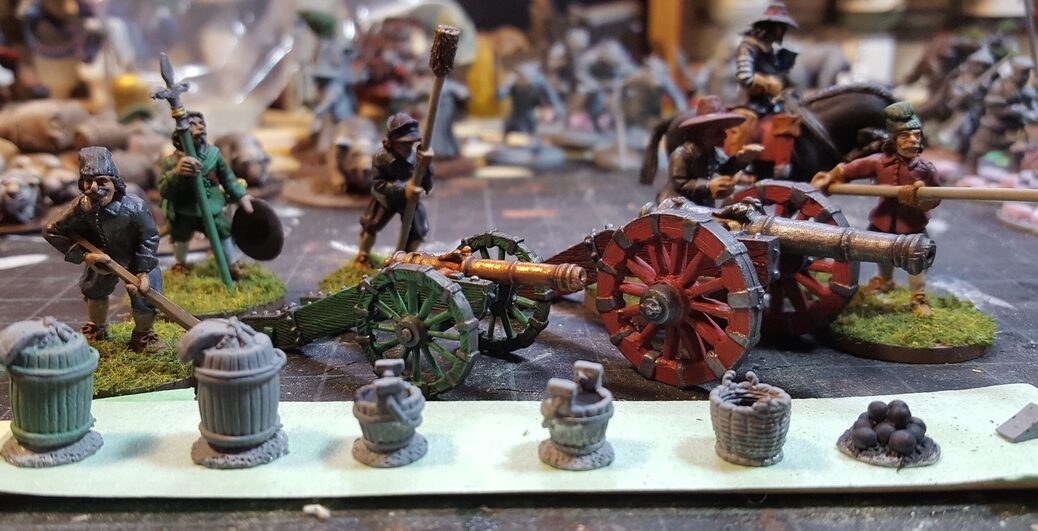 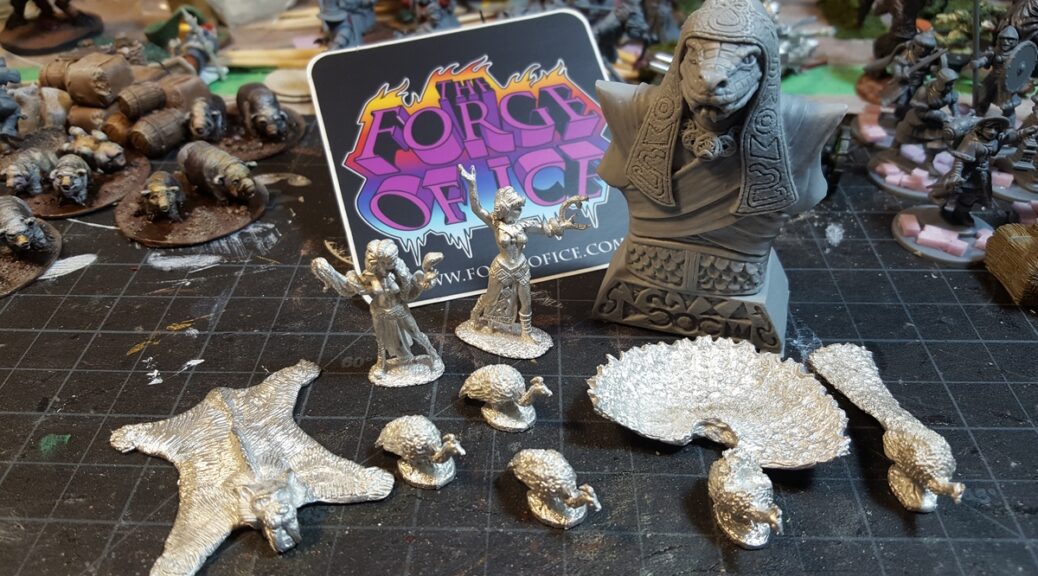 Ordered a few things from the excellent and varied ranges of Bad Squiddo Games back in March; things took longer to get from the UK to here than I’m used to, almost like some major world event is disrupting trans-Atlantic flights or something. However, everything was dispatched from the UK in good time and I am certainly not going to blame Anne of Bad Squiddo or the various postal services involved for a lack of air mail capacity…

I got a fairly mixed bag of stuff. A few ladies that will probably show up mostly as players or civilians in my English Civil War/Weird ECW games, a fine herd of pigs and some farm scenery, a bunch of cats, and some small scenery to add detail here and there, including a whole lot of mushrooms and toadstools for suitably creepy weird fantasy/horror forest bits.

Everything is really cleanly cast and beautifully sculpted. The scenics are mostly by the very talented Ristul and in an interesting slightly flexible grey resin; the white metal sculpts are by a variety of sculptors and all really well done.

Not pictured above is the pigs, my favourite single part of this purchase. I indulged in the Pigtopia bundle deal which got me ten pigs and six bits of pigsty/farm scenery. I’ve already painted the pigs up, basing them in small groups on 40mm bases.

I painted the pigs up to vaguely resemble one of the oldest heritage breeds of pig in the UK, a black-and-white breed that I now can’t find or remember the name of. Anyway, they painted up nicely and I look forward to watching them chase players around the table or be part of someone’s provisions on the hoof in a scenario.