First LoI post of the new year! Just a couple of things, mostly to get the BSC link out while entries are still open!

On the scenery front, this trio of useful little bridges with a neat construction trick involved to keep them more game-friendly from Olicanalad’s Games blog.

Over on the excellent Lead Adventure Forum, the Build Something Contest 2022 is accepting entries and already some some great discussions and ideas being posted. Highly recommended, the BSC always has some fun and gorgeously executed projects coming out of it. I don’t think I’ll be participating this year, but I’ll be watching the whole thing closely! 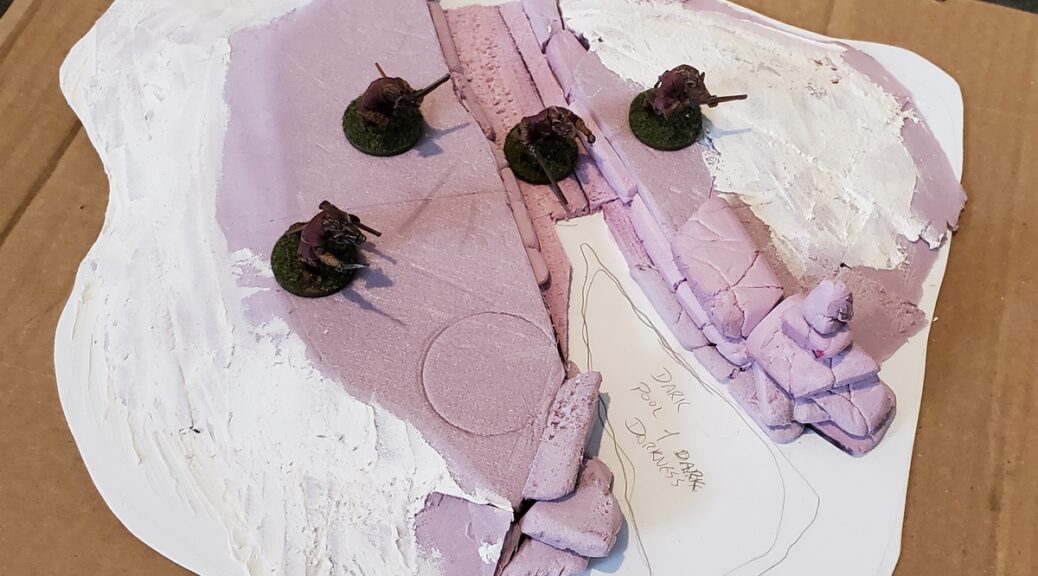 Build Something Contest 2021 over on LAF had the end date pushed back by two weeks due to the organizer having an attack of Real Life, but it’s wrapped up and voting should start this week over on Lead Adventure!

I’ll get a full gallery of all my build shots up after voting begins, but in the meantime here’s a teaser from early in construction of my entry, which wound up named the “Dark Pool of Dark Darkness”…

Quiet here the last week or so because I’ve been thoroughly distracted by Lead Adventure Forum’s Build Something Contest 2021!

Lots of cool entries in progress over on the BSC subforum of LAF. Posting WIP photos elsewhere is discouraged but I’ve taken lots of photos so far of the rocky moor piece I’m doing and I’ll be sharing them here in a month or so when the contest is concluded.

I do have some other stuff I’ll be showing off, including some scatter pieces I just finished that I’m quite happy with, so it won’t be totally dead here but go check out the BSC and look for my updates there!

I posted my Round 1 entry for the recently concluded Lead Painters League 11 (run over on the awesome Lead Adventure Forum) way back in mid-April but never got around to posting my other entries.

So here they are all at once, including Round 1 again for completeness sake.

Note that I repeated one entry in a later round, so there are only nine entries here instead of ten. My Round 2 entry, Patients of Ward 13, were re-run as my Round 9 entry after the English Civil War musketeers I’d hoped to run didn’t get finished in time. Interestingly, the Patients lost their initial round but won their re-appearance, which is unusual as repeat figures rarely win LPL rounds in my experience!

There’s captions for each photo with more details, including manufacturer info for all the figures.

If you want to see all 300+ entries (30+ participants, 10 rounds!) you can head over to the LPL 11 forum on Lead Adventure Forum. I highly recommend it, loads of awesomely talented painters participate, not just hacks like me!

Second-to-last round of the 7th Lead Painters League over on the Lead Adventure Forum, and it’s more Pulp Figures for me, with a cadre of suspicious characters lurking in a back alley somewhere!

These guys will be great fun in our Pulp Alley games, I’m sure. I’ll be doing up a League for them as soon as I’m back in Victoria and back into my usual gaming haunts!

Off to the last round of the LPL today! It’s been a lot of fun to participate, even if real life has kind of cramped my painting schedule.

Back to the Russian Civil War again this LPL round with some Copplestone 28mm Bolsheviks. I really like the whole Copplestone Back of Beyond range, even the “rank and file” infantry have loads of character and lots of really nice details.

The tan background and khaki on the Bolshies gives this photo quite a nice sepia tone overall; that wasn’t really planned but looks good!

Round Seven of the LPL is up, and here’s my entry. These guys are 28mm U.S. Navy gunboat sailors from Pulp Figures. I used the famous movie The Sand Pebbles as my source for the uniform colours, as I’m pretty sure Bob Murch did when he sculpted these figures.

The all-white uniform is striking, but hard to do and keep interesting. I used a couple of shades of Reaper Master Series paint – they have a very nice triad of off-whites – and these sailors have come up very nicely.

Over on LAF the LPL is continuing for another couple of weeks, go check out the current round!

Over to fantasy figures for the first time in this LPL for me, with a team of Reaper dwarves. Lovely figures loaded with detail, as you’d expect from Reaper. These short fellows are a lot of fun to paint, although picking out all the buckles, belt bags and bits can seem like an endless process.

I’ve painted these warriors up in almost all black livery, although the main colour on them is their extravagant dwarven beards and long hair. Apparently this particular clan of dwarves runs strongly toward red hair.

The current round of the Lead Painters League is ongoing over on the Lead Adventure Forum; go check out all the awesome painting on display!

Round Five of LPL7 was one of three Theme Rounds; this time the theme was “Historical Civil Wars”. This fits perfectly into my ongoing Russian Civil War project, and was one of the reasons I pushed myself to participate in this year’s LPL.

I pulled out some RCW figures that I’d finished very quickly and roughly, stripped them, and repainted them to a much, much higher standard. The main scene depicts a group of raiding Cossack cavalrymen coming around the corner of a village church to find the locals armed and waiting for them, with a big farm wagon pushed across the road as a barricade.

The local militia are Copplestone Castings Russian Partisan figures; they’re great figures loaded with character. I own twenty or thirty of these guys (at least two packs worth, maybe three, I’ve lost track!) and I have very few duplicate figures in that collection. I pulled out seven favourite poses to repaint for this scene. I painted them up as a mix of young men & old. The young men would likely be returned frontovik (Russian veterans of the Great War) or, if this is a Bolshevik militia, young radical Bolshies come out from the cities. There were rural militias for every political flavour of the Russian Civil War, and quite a lot of no distinct flavour at all — the “Greens”, who were either peasant militias formed for self-defence or anti-revolutionary bandits, depending on who was telling the story!

The Cossacks are from Brigade Games. Brigade’s Russian Civil War/WW1 in the East range doesn’t get as much attention as the Copplestone Back of Beyond ranges, but there are some lovely figures in that range, including these fairly recent Cossack cavalrymen. There’s a pack of regular riders with swords and slung rifles, and a command pack with officer, trumpeter and standard bearer; all six of these guys are from the regular Cossack pack. They’re very nice figures, a bit more fine-boned than the Copplestone figures but very compatible. The one downside to these Cossack figures is that some of the details are quite delicate, especially the sabres and scabbards.

By the time you read this my Round Six figures will be competing in the LPL; head over to the Lead Adventure Forum to see how they’re doing!

Last week’s LPL entry moves from the Lost Worlds of Round Three to the mysterious corners of the Indian subcontinent with some 28mm Thuggee cultists, also from Pulp Figures.

These murderous chaps come from three different Pulp Figures packs. The three right-hand figures – the leader, acolyte and sword-bearing bodyguard – are all from PBT-24 The Mad Guru. The swordsman is from PBT-21 Thuggee w/ separate assorted Weapons & Picks, and finally the rifleman is from PBT 23 Thuggee Fighters w/Martini Rifles. I’ve got another six or so figures to finish, as well as a couple of neat scenery bits that come in the Mad Guru pack.

Most of the skin tone comes from W&N Burnt Umber acrylic artist’s ink, applied nearly full-strength over a basecoat of Reaper Intense Brown with a quick highlight (before the ink goes on) of Reaper Oiled Leather. The hair is mostly Reaper Walnut Brown, which is a very-nearly-black dark brown.

Unfortunately for them, these skulking murderers ran straight into a really spectacular group of cavalry from one of the best painters in the contest, and got soundly thrashed, although lots of people said nice things about them! Luck of the draw; I’m a pretty solidly middle-of-the-road painter so a lot of how well I do in LPL sometimes comes down to who the random matchup for a given round is!

Round Five of LPL7 is running over on Lead Adventure as you read this. Round Five is one of the Theme Bonus Point rounds, with this round’s theme being “Historical Civil Wars”. That’s right up my alley, so go see how my Russian Civil War figures are faring this week!