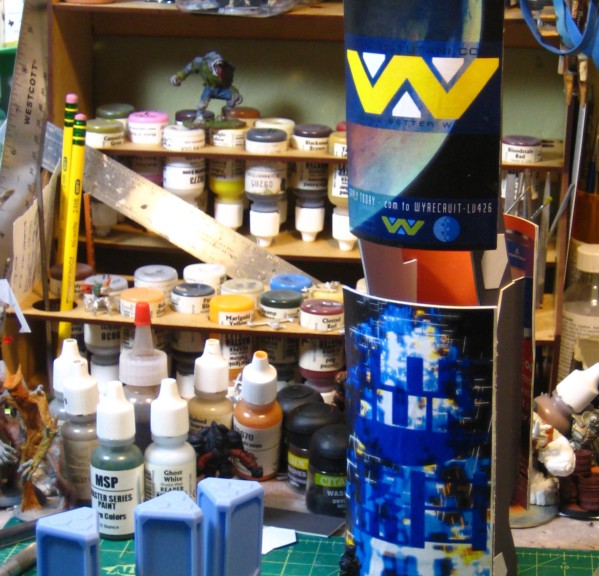 I’ve previously shown off big (5″ tall by 3″ wide) advertising graphics intended for use on an Infinity table – Weyland-Yutani, a travel poster, and Blue Sun; on Friday evening I decided to sit down and crank out the structure all three of those graphics will be shown off on.

The basic structure is actually very simple, being two vertical strips of mattboard with some cuts to make it look more interesting and some simple details added with scrap card. The frame is 2 inches wide, with the base being 3″x2″. There’s various horizontal pieces at several levels up the structure, although the structure is (deliberately) not optimized as a sniper nest. You can use it that way, but you are going to have compromised lines of fire no matter where you set up on the thing, and a number of the positions are also very exposed.

Total size is about 11.5″ tall with a footprint of about 3″x4″ or so; the dark blue figure at the base is the Fiday that has been seen in other photos.

Incidentially, the three blue things on the left are Tri-Ad Advertising Stands from Antenocitis Workshop; I picked them up recently along with a few things from Warsenal and at some point I’ll probably do quick review articles on them and some of the other pieces. Nice solid pieces of small urban clutter, anyway!

Somewhere along the way the default tabletop setting for a game of Infinity became “futuristic urban/quasi-urban environment”, which is as true of most of our tables locally as it is anywhere else, but the game does have a full and interesting set of terrain rules and even tries to include things like zero-g, hazardous environments, and similar.

With that in mind, I finally pulled the box of jungle terrain that I’d built a few years ago for pulp gaming out and we set that up for Infinity this weekend for our first tournament event around here.

The platforms are lasercut MDF from the collection of one of the other local Infinity folks, and they look good adding a sci-fi touch to the jungle. Jungle is hard to move through, obstructs shooting but does not block it entirely, and makes things like spotting a bit more difficult. It makes for a great change from our usual urban jungle, and I’ll be taking the box o’ jungle terrain to many more Infinity sessions in the future.

Going back to talking about our grandly-named “Vancouver Island Open” Infinity event, we wound up with six of us playing, with a decent mix of factions represented. I came a solid third with a Hassassin Bahram force; here’s the rankings:

The numbers are Wins/Total VP/Total Surviving Army Points. Total Wins determined basic standing, with VP and then Points being used to break ties. One thing I thought was interesting is that only two of us ran Sectorials, with four of the six opting for “vanilla” Faction lists.

We’ve got another event scheduled for the end of November, about a month from now, and hopefully we can get a regular round of events up and running locally!

Allow me to end with some 80’s hair and music with a highly appropriate title!
[su_youtube url=”https://www.youtube.com/watch?v=o1tj2zJ2Wvg”]

Yeah, so this one is based on a very, very juvenile joke. I’d apologize but I wouldn’t mean it!

It’s also smaller than some of my other recent graphics, designed to print at roughly business card size (2.25″ x 3.25″) to go over the backing cards used in the Infinity blister packs, which I’ve been reusing as billboard surfaces.

Everyone’s favourite terraforming/engineering/evilevilevil megacorp needs a giant billboard ad too! Third and (for now) last of my big 3″ wide by 5″ tall 300dpi ads. This one is also released under a Creative Commons CC-BY-SA License.

Borrowing from another popular science fiction universe to provide some graphical fodder for Infinity terrain, here’s another big (5″ high by 3″ wide, as designed) advertisement. This one is being released under the CC-BY-SA License for reuse as you please.

Background graphic from monaeberhardt on Flickr, CC-BY-SA. Blue Sun graphic redrawn in Inkscape by me from smaller images found on the web; original is copyright Josh Wheadon or whichever studio produced Firefly. 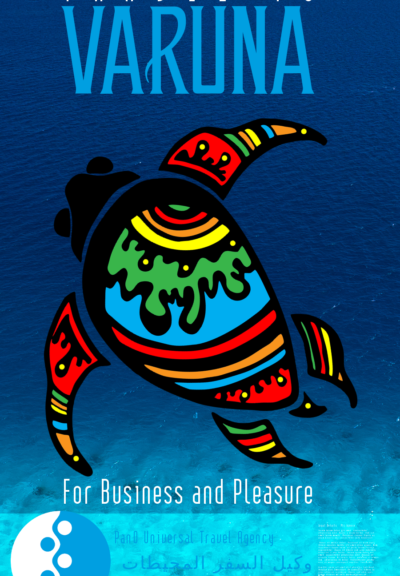 I’m home with a stubborn cold that won’t go away, so decided to kick GIMP and Inkscape to life and create another couple of billboard-sized ads for my Infinity terrain. Here’s one advertising the PanO ocean world of Varuna as a travel destination. It’s available under a Creative Commons BY-NC-SA License for (limited) reuse.

Infinity has, for most troops, a 180° front arc for Line of Fire and almost all actions. Other games have similar arc requirements – Full Thrust uses six 60° arcs on it’s starships, for example. To help me do the 180° arcs on my Infinity bases, I’ve whipped up a simple little measuring widget in Inkscape.

Use should be fairly obvious – centre your bases on the marker, put small marks with a pencil or fine paintbrush at the arcs you need to specify,