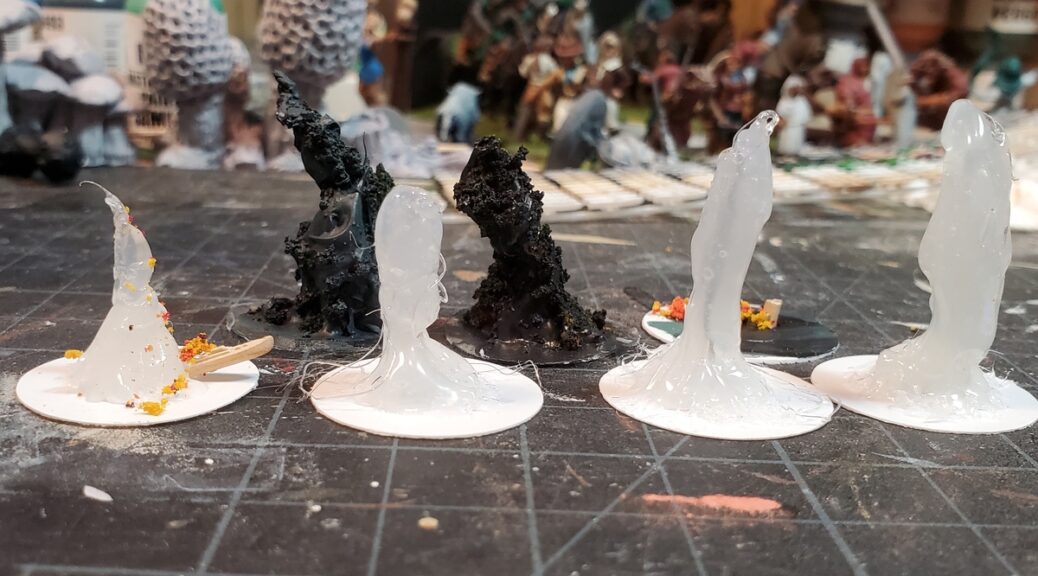 Sometime earlier in the pandemic I ordered a batch of 1/1200 3d printed stuff from Shapeways, who use some sort of resin printing to get incredible detail on their prints. I keep meaning to write up that purchase in a proper review, I took a bunch of photos of everything I bought, but nevermind…

One place I have used a few of the 3d printed bits is in some wreckage markers. I bought a sprue of inflatable liferafts, and the sprue of boats included traditional life boats in several sizes, so I popped a few of those onto 1″ styrene bases as wreckage markers, or possibly as scenario goals – rescue downed aircrew or stranded squadronmates, that sort of thing.

I also did up a batch of fire/explosion markers, also on 1″ bases. These are pretty simple things, made up mostly of hot glue splatted and “sculpted” with the tip of the hot glue gun. Holding the bases upside down and twisting them back and forth as the glue stretched and cooled helped, and for several of them I dunked them into the cool water of my paint rinse pot to help “freeze” the shapes. A few of them have wire centres but the most interesting ones don’t and I won’t bother with that step if I do any more.

After the glue had cooled and I’d cleaned the thready wisps of glue off that hot glue so often leaves, I glued on a bit of medium flock as extra texture, which works nicely.

The explosion markers got a black basecoat. I considered trying to paint actual fire on them, but decided to just do a bit of a grey drybrush, mostly on the very tops, and leave them at that.

The boat sticking out of one base, about to be engulfed in an explosion, is one of the Shapeways 3d printed ones, left a generic grey so it could be from any side of the war. I cut the stern few millimeters off that boat to tuck it into the body of the explosion a bit more, then used that boat piece on the fire marker just visible on the far right of the photo above.

The Shapeways stuff makes for nice extra bits, and the explosion markers are super easy to make. These little pieces should make for some interesting extra colour during our next games of messing about in tiny boats.