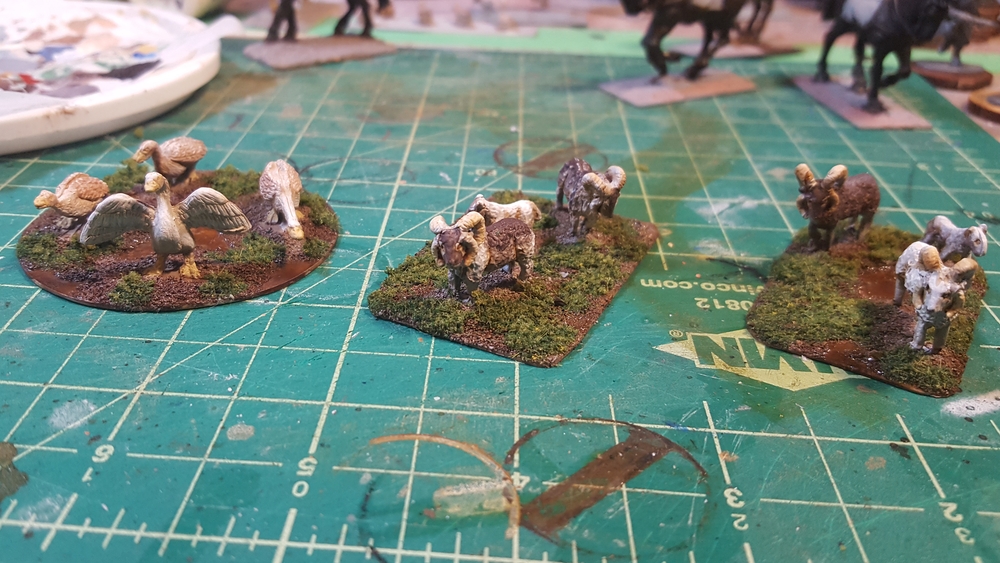 Not the greatest photographs going, but so far the only ones I’ve gotten of all of my recently completed 28mm ECW figures all together!

Starting top left, the dark yellow coats belong to six firelock musketeers (in Pikeman’s Lament terms, either a Forlorn Hope or Commanded Shot). Clockwise we have two troops of regular horse, six per troop. One unit is brand-new and the other had most of it’s painting done years ago but have been touched up and re-based just recently. Somewhere in amongst the other horsemen is the mounted commander as well, finally finished and based.

The only unit not on the tray in the photo above is the twelve pike in blue I finished back in July 2017.

All these figures are from Warlord Games.

Finally, for fun and extra colour, I’ve been painting up the farm animals I got from Warbases early in 2017.

The geese are on a 40mm round styrene base, while the two sets of sheep are on roughly rectangular bases about 1″x2″. They’ll mostly be just scenery, or objectives in games that need loot tokens, but I’m also planning on using the flock of geese as a hazard in games of Pulp Alley, because big geese can be scary psycho critters!

Still in progress on the farm animal side are five or six ducks to go in and around the ponds I made in 2017, two big cart horses, and a couple of goats. I’ll probably get a few more animals on my next Warbases order, they’re fun to paint and provide great extra detail and colour on the tabletop.

On the ECW figure side of things the first six cuirassier heavy horse are in progress, and I’ll be doing up at least one more unit of firelock muskets. There’s also six officer/sergeant/character figures in progress – more on them in another post!