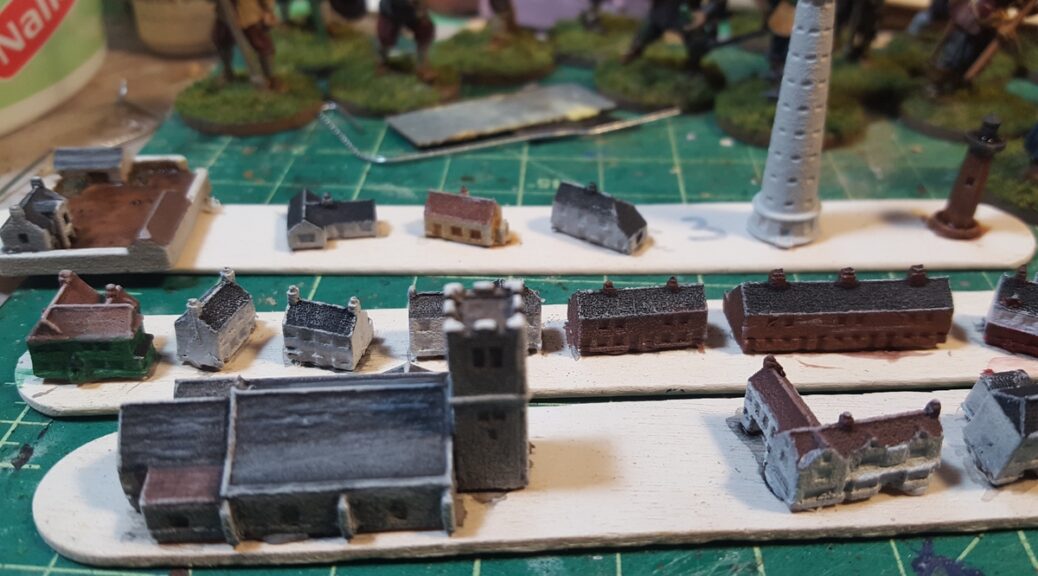 
Above is everything I primed in this batch, including a number of buildings I don’t intend to use right way and all of the British 1/1200 boats and the two coastal merchant vessels I bought from Last Square in December for this project. Everything is mounted on tongue depressors (craft sticks) that are 6″ long and about 3/4″ wide, just for scale. Small buildings and tiny ships, indeed!
The only thing left to do on most of the buildings now is to go in with black and darken all the windows, and then some cleanup here and there. I’m going to be mounting some of the buildings on thin plastic card to make it easier to add garden walls and similar details, and then we’ll get onto flocking and detailing the actual coastal pieces last seen mostly painted in the previous post.
Finally, because this is supposed to be a naval wargaming project, here’s a look at some of the Royal Navy ships & boats from Last Square, along with two coastal merchant ships. In the foreground are three anti-submarine or minesweeping trawlers, then four Fairmile D Motor Torpedo Boats. The third stick back has Fairmile D Motor Gun Boats and (with the red hatch covers) a coastal merchant vessel. In the background right is the stern of another, larger coastal tanker, as well as two Martello towers from Brigade Models.