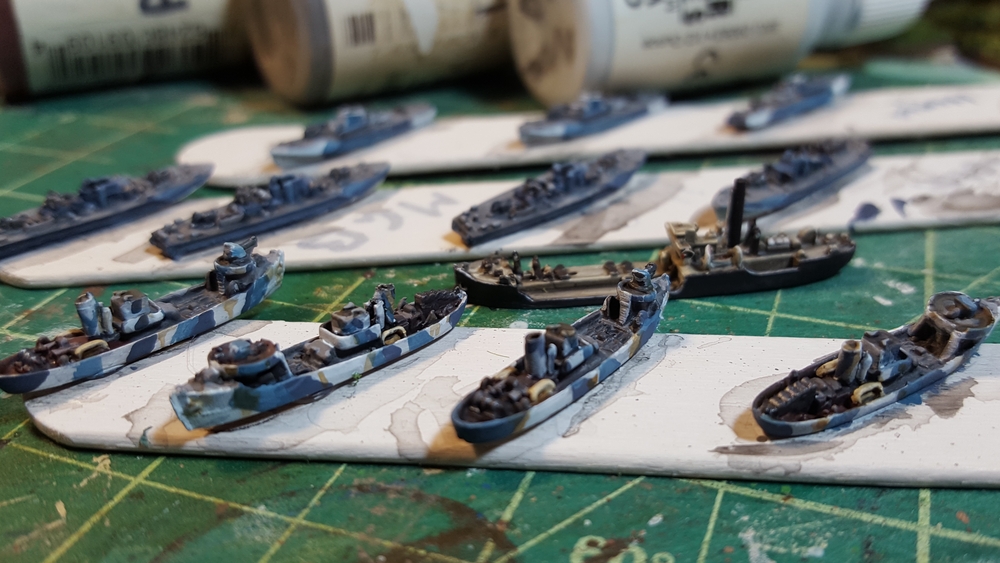 I finally have painted ships (well, boats, mostly) to go with the coastal terrain I’ve been showing off!

All my 1:1200 naval stuff so far is from Last Square, the Figurehead range. Last Square are very easy to deal with and shipping from the States up to Canada was quick, although their website is one of the most glacially slow I’ve seen in recent years!

The figures are incredibly detailed for such tiny models. I’m not kidding when I say I own 28mm figures with less detail on them than these little boats!

For painting I hot-glued everything to 6″ craft sticks/tongue depressors, which worked well. I plan to use clear plastic bases (which aren’t here yet, the Litko order of custom bases is enroute) so couldn’t base the boats before painting. I did the Royal Navy & merchant ships first, and cramped myself too much – about four ships per craft stick is a good spacing, closer and your ships get in the way of the brush.

For Royal Navy colour schemes/camoflauge patterns I picked up an ePub copy of Mal Wright’s British and Commonwealth Warship Camouflage of WW II – Vol I from Pen & Sword, and can highly recommend that book if you need inspiration for your RN coastal warfare boats. We tend to think of warships as grey (well, I do, anyway) but the WW2 RN used a lot of white and blue disruption or dazzle pattern schemes on their vessels, some of them complicated enough to be challenging to reproduce in 1:1200 scale!

For the German Kreigsmarine there doesn’t seem to be a handy single-volume book of paint schemes like there is for the Brits, but after some questions on the Naval Gaming FB group and some Google Image rummaging I decided on a simple off-white for the famous Schnellboote and a grey-and-dark-grey disruption pattern on the more utilitarian Raumsboote.

With dozen Kreigsmarine, sixteen Royal Navy, and a pair of small coastal merchant ships I’m set for a good variety of scenarios already. More S-boats, more merchants, and some of the missing classes of Royal Navy Coastal Command vessels, especially the very common Fairmile B, will come in the future, but this is a good mix for a mid- to late-war setup, from 1942 or so to the end of the war in Europe.

Our first game should be this Sunday, using Narrow Seas by David Manley. Need to print off ships sheets and a few other things before then!