This is not a new project, just something I remembered while waiting for glue to dry on my current scenery and decided to revisit.

In September of 2009 I sat down with a bit of Milliput and some scrap wood and created the following lectern, upon which resides a Tome of Madness, filled with eldritch verses of great power and bound in the red leathery hide of captured demons. Or something like that, anyway. It was a birthday gift for my brother as he was busy painting a group of cultist figures from Pulp Figures. That pre-dates the current version of this website, so it never got featured here, although I did show it off over on the Lead Adventure Forum. Enjoy! 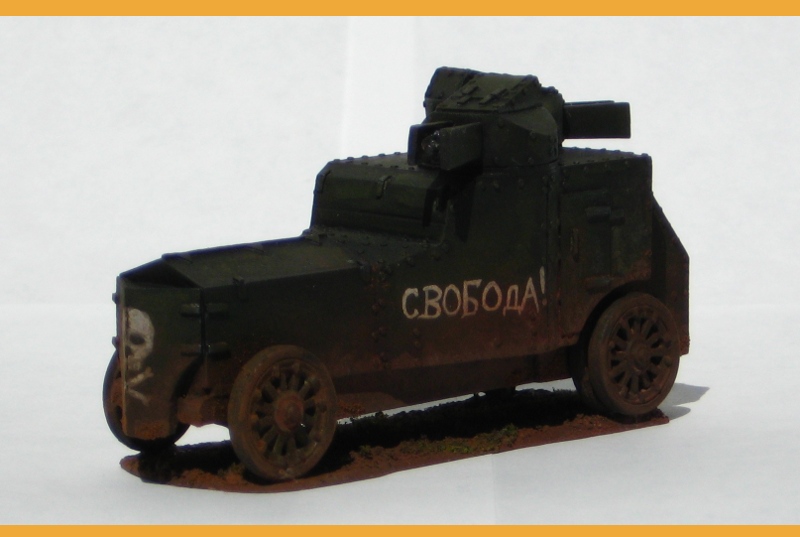 Finally got the Russian Civil War Armstrong-Whitworth Armoured Car from Copplestone completed and photographed. The new monitor and computer I set up ten days ago helps hugely with good photos, not only is processing them faster the new brighter monitor makes contrast and colour balance easier to sort out. (oh, and I remembered how to set custom white balance on my camera again, which always helps picture quality and reduces the amount of work you have to do on the computer afterward…)

Anyway, the Russian armoured car “Freedom!”, suitable for appearing on nearly any side of the Russian Civil War, all finished and ready for the tabletop:

Two related links, as well. Via Lead Adventure, a very, very high quality (and free!) booklet on vehicle weathering. Most of the techniques aren’t new, but it’s great to have them clearly illustrated in a free, high quality PDF.

Via GWP, this page on Austin armoured cars, mostly focused on the ones that wound up in Polish service but of course it talks about the ones built in Russia that were captured by the Poles. Great photos, including some unique ones I haven’t seen anywhere else.

These are only fairly quick if you ignore the fact that they sat around for about four months half-finished before I got bored of them taking up space on my project shelf and got them finished!

Actual construction time is quite short, nevertheless, and the results are solid enough for wargaming purposes.

So, Corey and I spent the weekend over in Vancouver at the always-excellent Trumpeter Salute 2012 gaming convention. We saw a lot of people we really only see at Trumpeter, played a bunch of good games and got to spectate at many more!

Corey is suffering from computer issues and hasn’t gotten his photos processed or online yet, but I finally sorted mine out this evening. You can go check out all of them on my Trumpeter Salute 2012 set on Flickr. Or you can read on for some of my favourite photos, and favourite games from this year’s version of Trumpeter Salute.

Canvas Eagles is an old standby, a great World War One air game. Rene runs pretty it much constantly at Trumpeter, and Corey and I both got into it Friday night. On opposite sides, of course. We have a firm convention rule that if/when we find ourselves in the same game at a convention, it has to be on opposite sides. That’s my Fokker Eindeker at the centre of this photo, which spent most of the game locked in a swirling, inconclusive dogfight with the very similar French Moraine-Saultier to the left. Both aircraft are very agile but not terribly fast, so we could neither outmaneuver nor outrun the other!

Colin is another Trumpeter regular, and has run a spectacular Darkest Africa game several yaears in a row now. I didn’t play this, just got a few snapshots.

Our Saturday morning entertainment, with a friend and I attempting lead our outlaw gang into town to rescue a gang member from the gallows, while Corey and another gamer ran the Law to try (and succeed, worse luck!) in halting our attempt. Legends of the Old West has the virtue of being an uncomplicated set of rules that get out of the way and let you get on with the game. Neat scratchbuilt Old West buildings, too.

My own “Even Whites Bleed Red” Russian Civil War scenario I’ll give the full AAR treatment in another post, but it went well.

Malcolm is another Victoria gamer and friend, but this iwas my first chance to see his full, spectacular “Boy’s Own Waterloo” setup. The British even won this time, apparently.

Saturday evening Eric Hotz ran his Roman Seas game, with our convoy set upon and seized by the merciless Pompey.

Sunday was a bit quieter, but Colin put on the appropriately timed War of 1812 Battle of Queenstown Heights, in which the British/Canadian forces held the Americans to a bloody but marginal victory.

Also running Sunday was this spectacular pulp game set in the South China Sea, with various factions vying to discover the secrets of this volcanic island.

Except that volcanic islands are, well, volcanic, and sometimes prone to slipping back beneath the waves and taking their secrets with them! No need to imagine that with this game, the lower half of the island really does vanish!

This is only about one third of my Trumpeter Salute photos, go check the rest out on Flickr.

Thanks again to Martin and his family for the hospitality over the weekend, Jon for transport to and from Vancouver, and the excellent organizers, GMs and other attendees at Trumpeter Salute for a great time. See you next year!

Photos, a bit more narrative and some thoughts after the jump!
END_OF_DOCUMENT_TOKEN_TO_BE_REPLACED

As discussed in my last post on entering LAF‘s LPL5, here’s all ten of the images from my 2009 LPL3 entries. I finished somewhere in the bottom third of the pack, but certainly didn’t enter with any expectation of doing much better — I entered to give me incentive to work on my painting and photography, which worked out just fine!

LPL3’s bonus rounds were “Germans” for Round One, which I botched; the German WW1 stormtroopers I did for Round 7 were supposed to be my Round 1 bonus entry, but I ordered them too late. Round 5 was “Cavalry”, which I managed with my first 15mm fantasy unit painted in years. Round 10 was “Lost Worlds”, bonus points for an exploration team, a “native” team and “monster” or similar — pegged max bonus points there, and a photo I’m still proud of!

The entirety of LPL3 is still archived over on LAF.

Another revival from the old Brian’s Wargame Pages version of the site, and one that I should have brought forward ages ago! You can see the Esquimalt Drydock on Google Maps for a sense of scale that wasn’t available ten years ago when I first posted the photos. — Brian, 22 Feb 2011

In the summer of 2001 I was roommates with a guy who worked in the drydock here in town. He turned into a real asshole after being laid off, but while he was still working he gave me a tour of the yard. I brought my camera, and these pics should inspire people looking for new industrial modern or SF scenery projects!

One thing that would be very difficult to reproduce on the gaming table, except maybe in 6mm, would be the sheer scale of the place. I didn’t have my wide-angle lens with me, so I didn’t even try for some real area photos. The drydock itself is 1100 feet long; the two big cranes pictured below are several hundred feet tall. There were two fair-sized ships in the drydock when I was there, and they could have accomodated a third with no difficulty. And this isn’t even that big a drydock, by maritime engineering standards. The ones that can accomodate nuclear-powered aircraft carriers are even bigger…

Wargamers interested in industrial scenery or future-tech industrial landscapes (Necromunda style) should find plenty of inspiration here! Even if you can’t reproduce the scale, the clutter, details and fixtures should provide some ideas.

Click any image below for a (slightly) larger view. Keep in mind these are refugees from the Old Web, when 600px wide was a Big Image.

Another repost from the old site — Brian