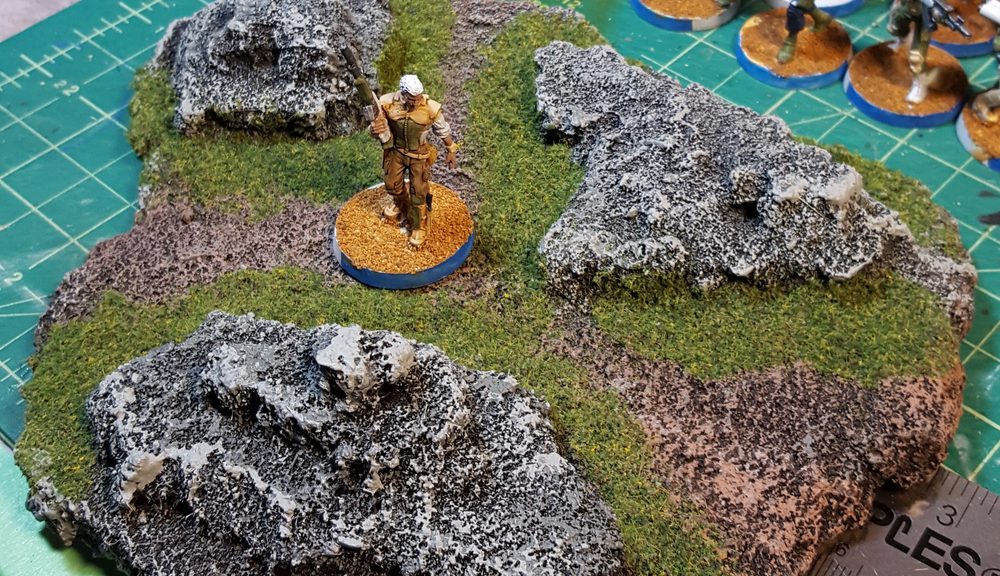 I’ve finished the first two hills I started a while back, and built a third large hill to finish up the set for now.

After the first coat of glue/sand/paint “goop” dried I added a second layer to a few areas of both hills, just to smooth out a few seams and such.

I mentioned in the first hill post that I was piecing these hills together out of pieces of styrofoam instead of using solid sheets for every single layer, to stretch my current supply of the stuff just that little bit further. Here’s what the underside of the two hills looks like:

Before I started painting, here’s what the two hills and the smaller cork piece looked like.

Painting these was pretty straightforward. I started with a flat black basecoat, to thoroughly hide any hints of pink styrofoam that managed to peek through the texture goop layer(s).

The earth areas got a heavy brown drybrushing, then a sloppy wash of thin brown paint, and finally a drybrush of brown mixed with a bit of white.

After that I did a couple of layers of grey drybrush on the rock areas; the initial drybrush was grey mixed with a bit of black, then straight grey, and finally grey mixed with a good dollop of white. The final drybrush mostly got applied on the upper edges of the rocks and on protruding corners and such.

Finally I flocked random areas of the earth parts, let everything dry, and called it all done!

I’ve started making a third large hill, and I’ll get photos of that up in the next day or so!