Corey recently started painting up a Chinese Warlord force from Copplestone 28mm figures to extend our Russian Civil War gaming in a more Back of Beyond direction, and he’s actually getting units painted and ready for the tabletop (normally I bug him about being the world’s slowest painter…) so I sat down with Inkscape and created a basic set of cards so his Chinese Warlord forces can run in our Through the Mud & the Blood-powered games.

This isn’t quite the full set I made for the Red & White Russian forces; it’s currently missing a LOT of the cards needed for a full M&B game. It works just fine for a Chinese force allied with a White Russian force, though, which is how they’ll be appearing in the next while, until the force gets bigger.

The PDF is four pages long. The first two pages are the cards, set up to match the earlier Russian cards. Page three has the basic graphic needed for colourful markers for a Warlord force – we use these to mark units that are activated or units that are on overwatch (what M&B calls “Wait For It”). The last page is a pair of blinds.

RCW_Warlord_complete_24March2013 — PDF, 349Kb — this file is Copyright 2013 Wirelizard Design/Brian Burger; permission granted to copy or print for personal use.

I’ll do up a full set of Warlord Chinese cards eventually. When I redid all my Russian cards in January I reconfigured the SVG file in Inkscape to make it a LOT easier to edit and create new versions. I’ll also be producing a set of British cards, so my long-neglected Brits in tropical kit can join the Back of Beyond madness in proper style. 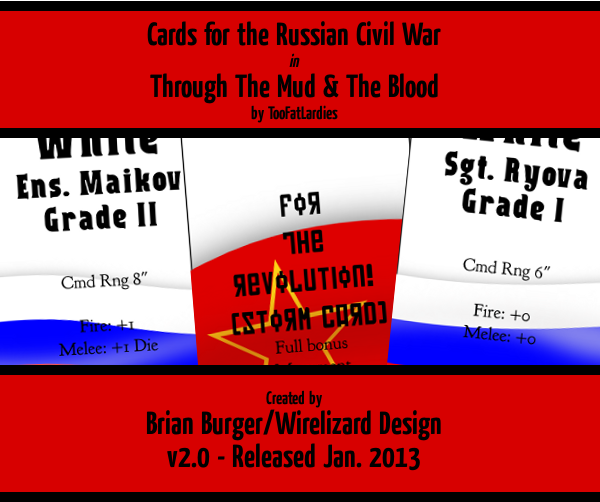 As I mentioned a few weeks ago, I’ve been rebuilding the entire deck of cards needed for Through the Mud & the Blood-powered Russian Civil War large skirmishes. I first made these cards back in November 2011, and after a year of use, we realized we’d wound up scribbling extra notes and other edits all over the cards we used, so I sat down and rebuilt the entire deck to incorporate the changes and edits we’d made while using the cards.

There are four pages for Reds and four for Whites, with ten Big Man cards per side, ten Command Initiative cards, a full set of the basic “National Characteristic” cards as laid out in the main M&B rules, and ten more Support or blank cards so you can customize your deck and add scenario-specific cards. The front page also has two Snifter and one Blank card per the main M&B rules, so one printing of all nine pages should give you everything you need for quite large M&B games.

Feedback in the comments, if you’re having problems, find a typo, or have ideas for the next edition of these cards!

As I mentioned recently, I’ve been rebuilding my Russian Civil War cards for Through the Mud & the Blood over the last few weeks. I’ve finally got the revised versions of my existing Red & White Russian card sets for RCW to a point where I’m happy with them, so for a change of pace this evening I set out to design some cards for some of the other forces we’ll have available.

Above, a quick screenshot of the current state of my cards. The Red Russian card has slightly changed background art; all the Big Man cards have a significantly changed layout with more information, and I’ve got a basic background for both British and Warlord Chinese forces! I have a small force of British in tropical kit, and late in 2012 my brother picked up a starter force of Warlord Chinese from Copplestone, which he promises to paint up one day.

One thing I’m not sure of: flag or star insignia for the Warlord Chinese forces? The flag fits in better with my other force cards, but the star works a bit better with text on top of it, as that black stripe on the flag really gets in the way of legible text. Opinions in comments below, please!

The British are also, of course, likely to be useful for other M&B folks, so I’ll get that set done up next, probably in February after GottaCon 2013, where I’ll be running an M&B-powered RCW game!

As we’ve played Through the Mud & the Blood-powered Russian Civil War skirmishes over the past year or two (has it really been that long?) we’ve gradually tweaked and modified several of the custom cards we use. This has lead to a number of cards with pencilled notes all over them, a few blank cards re-purposed as hand-written replacements, and various other inelegant things, so I’m taking advantage of some post-Christmas quiet to begin rebuilding my custom card deck.

I’m starting with the Big Man cards, which are by far the most common in an M&B game deck. I’ve removed the “Big Man” text, as it’s obvious without having to be pointed out every time. Command Radius has been joined by a reminder of how much a given BM can influence Fire/Melee die rolls, and there’s space for special abilities or whatever. I’ve also gotten rid of the “Big Man #x” text, as we found we were often ignoring it in favour of a simple pencilled number at the top of a card.

I’ll be adding some notes on the rules to many of other cards, especially Heroic Leader, Dynamic Commander and Friction, which often cause confusion. As well, I’m going to do up a series of “Troop Cards”, which will be quick reference cards for the players roughly the size of recipe cards, with basic details on the troop types, equipment and vehicles in their forces.