Everybody has played Cowboys and Indians before, but not many have experienced the insanity that is Pony Wars, a game designed deliberately to emulate the Western TV shows of the 20th century (now give the rules were written in the 20th century, this isn’t surprising). The miniatures (and the rules) were courtesy of one of the long-standing members of our gaming club, Dale, who like most other long-term gamers has all kinds of interesting things collecting dust. Joining in the fun were a few other regulars as well as Josh, a random walk-in we immediately made Colonel (that we couldn’t agree on who should be in charge made this decision much easier).

The table was laid out in a fairly basic pattern, with the US Cavalry fort at one end, two passes in the middle, plus a town, three homesteads, a mining encampment, and an Indian village. Unlike most adversarial games, all the players are nominally on one side: US Cavalry commanders of some rank or another.  The Indians and all the civilians controlled through card-driven events and dicing on tables for reactions. In fact, the game was very table-heavy, as is common for games of the ear (1980’s)

I rarely take pictures of the whole table, so here is one taken by another player: 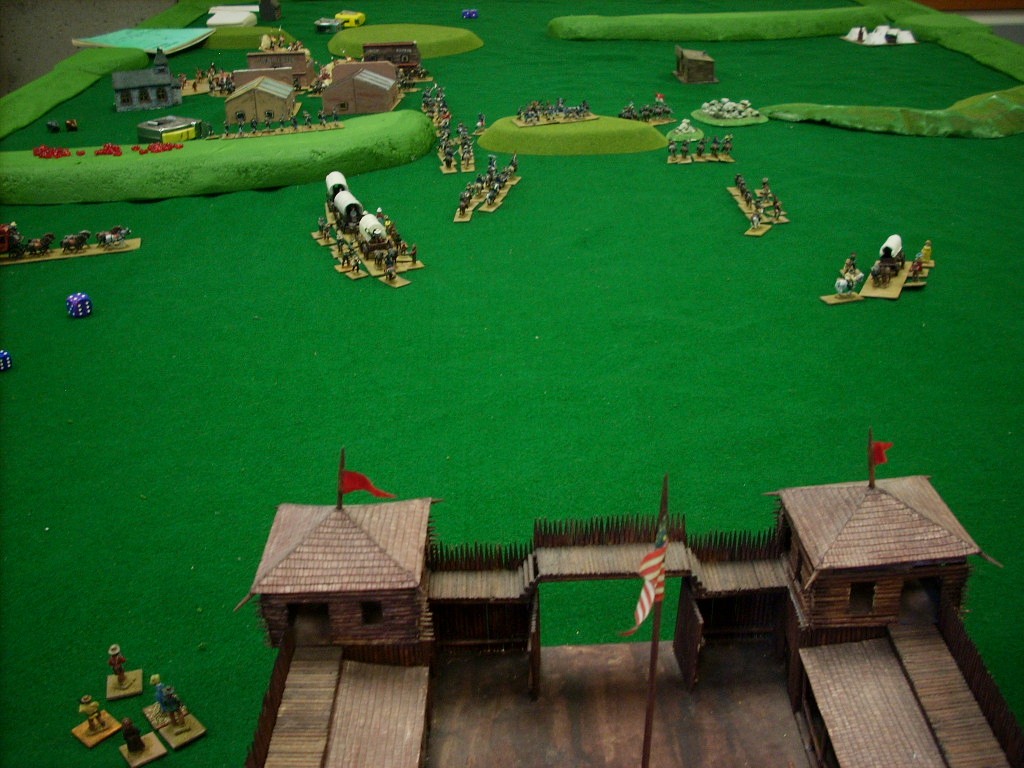 Given our inability to agree on a commander, our inability to agree on an overall strategy meant that we ended up streaming out of the fort without specific orders. David, who had US Indian-ally Dando with him, decided to head off to the far corner of the board to bravely burn out the Indian village, held by old men, women, and children. Malcolm headed off to hold the passes with his artillery and scouts, and the rest of us buggered off to do our own thing. Given the rules told us to head out in single file (it looks better), the looked something like this:

The game, like all good stories, has a few chapters in which our heroes get their asses handed to them. Ours included Dando, after heroically deciding not to burn down the Indian village right now, getting slaughtered in one-to-one combat with the Indian chief, Big Eagle, despite Dando have ridiculously good odds. Karma, not yet imported to America, was still a bitch. I got half of my cavalry troopers, on detached duty, chopped up by Indians, moments after telling my fellow commanders I risked defeat in detail. Ah details, never liked them.

Other hilarious moments included me failing to bring the wagon train under control (this required a dice roll, which I naturally failed many times) right up until the wagon train ,having crossed the entire board, spotted the Indians. They took a few potshots then freaked out and circled the wagons. Dando’s blunder also lead to the only civilians we lost getting massacred by Big Eagle, which sets us up for our climatic battle for the town.

With fresh US Cavalry that entered the board near the town, headed most of the board to the fort then turned around and headed back to the town, I managed to stream my troopers right into Big Eagle, fresh off his scalping of our brave settlers (evil land-stealers to the Indians). You can shoot yourself dry in this game in an awful hurry, which I proceeded to do. I then discovered I had retreated to the saloon. Needless to say, that was it for my troopers. They were “conserving ammo” in case more Indians arrived. None did, and other brave soldiers drove off Big Eagle, so we called the game at that point with no Indians on the table and turns before any would arrive.

All in all, it was a blast. The 15mm figures of Dale were beautifully painted, and his town was amazing. Playing with what amounted to AI-controlled enemies allowed us to see what our upcoming Zulu Wars game might be like, and added a nice level of aggravation for their players (Damn civilians, stop running around and get to the fort). The best part of the story-driven aspect was that it allowed all the players to feel involved, even when you could spend several turns do nothing but moving around. For those visual types, I have a few more pictures in my flickr set of the game.