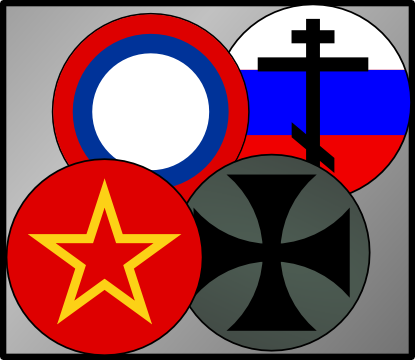 In the run-up to this weekend’s GottaCon convention, I’ve finally gotten around to finishing the patrol markers I need to properly run Chain of Command-powered Russian Civil War games.

I’d done status markers back in January, and now I’ve got a set of the Patrol and Jump Off Point markers you need for each side in Chain of Command.

Even better, I’ve done up German and Imperial Russian markers as well as White Russian and Red (Bolshevik) markers, so Eastern Front World War One is covered as well as the RCW. The Russian markers are based on the roundel used by the Imperial Air Force; the White marker is the Russian tricolour defaced with an Orthodox cross; the Reds get a yellow star on red background; and the Germans get the classic cross on a feldgrau background.

Note that I included the previously-released CoC tactical markers as well, just to put the complete set of markers into one PDF.

Permission is granted to print & copy this file for personal use only. Chain of Command is © TooFatLardies, obviously.

Enjoy the markers! Feedback, suggestions or corrections in the comments below, please! Let me know if you actually use these things!