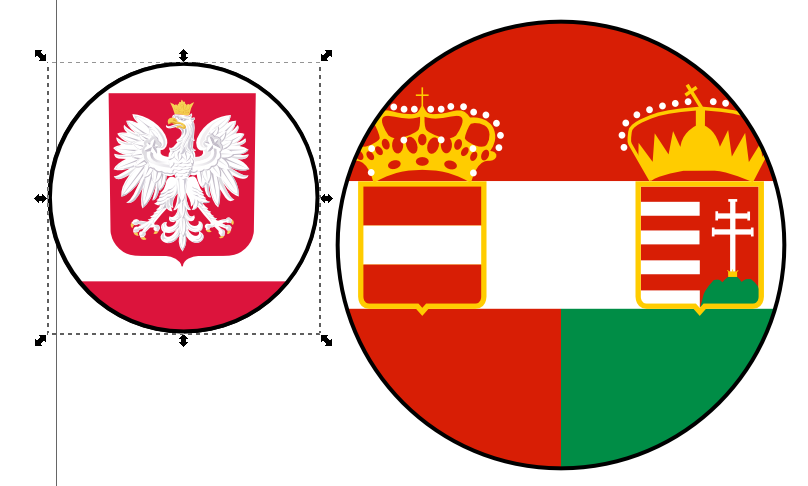 I’ve been working on a couple of additions to my earlier collection of markers for Chain of Command-powered Russian Civil War.

As I was finishing up that first set I realized that I was pretty close to actually having a full set of markers for everything that happened in and around (western) Russia between 1914 and 1921 or so, with German, Imperial Russian, Red, and White markers. All I was missing was the Poles for the Russo-Polish War and the Austro-Hungarians for their front against the Russians in WW1.

The Polish eagle works nicely as a symbol, with red and white from the Polish flag in the background. The Austro-Hungarian symbol, like that Empire itself, is a bit of a colourful mess which incorporates a circular slice from the A-H Imperial Flag.

After I put the original markers up on Lead Adventure one of the other members posted some splendid but rough versions of his visions for alternate and extra markers. I especially liked his alternate Red marker, which used the hammer-and-plough symbol of the very early Russian Revolution, before widespread adoption of the hammer-and-sickle. I can easily see why the plough lost out to the sickle, it’s a difficult thing to draw well and tends to turn into a lumpy blob at the best of times!

Nevertheless, I sat down with Inkscape last night and finally produced a hammer-and-plough I’m happy with. Here’s an oversized version.

I’ve got a few more ideas for additional markers, and I’d like to add markers for the various international intervention forces (Britain, France, the Americans, maybe even Japan), especially as doing the intervention forces would pretty much also finish the Western Front marker set I’ve been considering making!