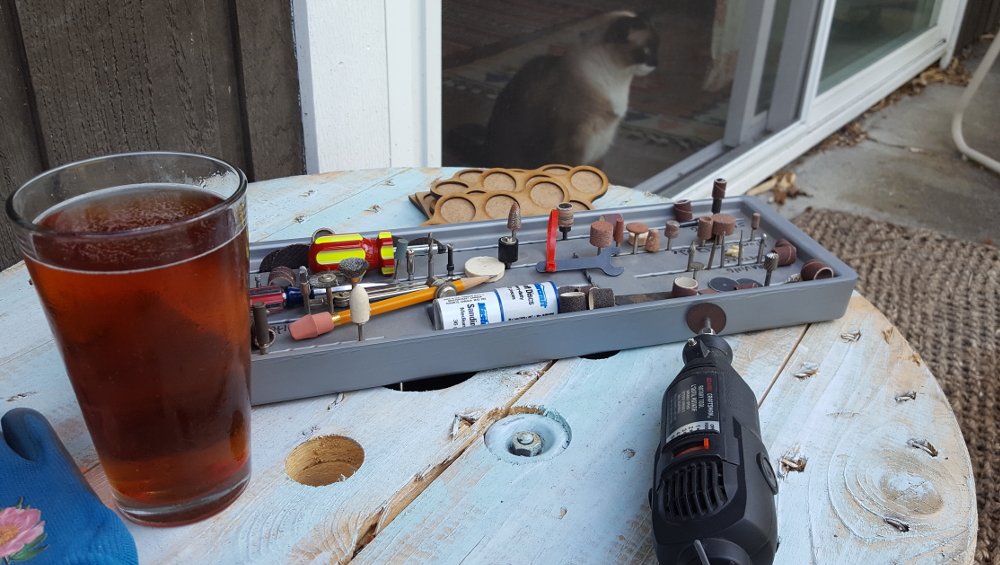 I picked up a batch of simple lasercut MDF trays sized for 25mm bases on one of my recent Warbases order. Pikeman’s Lament uses either six or twelve figures per unit as standard, so I bought a batch of six-base skirmish trays (listed on Warbases’ site as “Dux Brit/Zombie Trays“) and a pair of twelve-base three by four regiment trays for when a PL pike unit is in Close Order, both cut for the 25mm MDF bases I’m using for my English Civil War/Pikeman’s Lament project.

Each tray is two layers of 2mm MDF, lasercut and with the two layers already glued together straight from Warbases. I’d been thinking of replacing the bottom solid layer of 2mm MDF with something thinner (probably .030 plastic card) as I am not a huge fan of big thick bases, so having them arrive pre-assembled forced me to consider different options.

As an aside, if you really did want un-glued movement trays, or even just the tops so you could do your own base layers, I’m fairly sure Martin and Warbases crew can set you up that way. Chuck them an email and ask!

I finally broke out my grossly underused Dremel tool, poured a pint of excellent beer, and sat down on the back patio with this unwise combination to modify my movement trays to my liking!

A Note Of Warning: Power tools capable of 30,000 RPM and alcohol is not a recommended combination. Sanding MDF without wearing some sort of filter mask is also not recommended. Even though I was outside while doing this, I can still taste MDF dust on the back of my mouth over a day later. Wear a dust mask of some sort. Don’t combine power tools and beer, even very good beer. Dear readers, be smarter than me. Thank you. Also, should you not be smarter than me, don’t send lawyers after me. They’re scary. Thank you again.

A couple of minutes with a sanding drum on the Dremel per base rounded the top edges off nicely, and the corners of the regiment bases. I touched up a few scuffs from the Dremel by hand with regular sandpaper, knocked the nasty MDF dust off, and then brought everything – including the beer – inside to my workbench to add a bit of sand here and there to the trays.

With that done, I put the Dremel away, poured another pint of beer, and put a bit of sand around the edges of the trays, being careful to keep it out of the holes. Dark brown base paint followed, then some drybrushing after that was dry, and finally some of my usual flock/turf mix here and there to help blend everything together.

These movement trays are a great value and will make “big” skirmish games a bit easier to manage! I’ll definitely be getting more, especially of the six-base irregular trays, and might contact Warbases about some custom irregular trays for my cavalry, who are mostly on 20mm by 40mm rectangular bases, or my artillery, when I add some guns to my Pikeman’s Lament forces. Having the entire force on similar movement trays would look really sharp and make games a bit more streamlined, especially if I’m running convention games for other people.