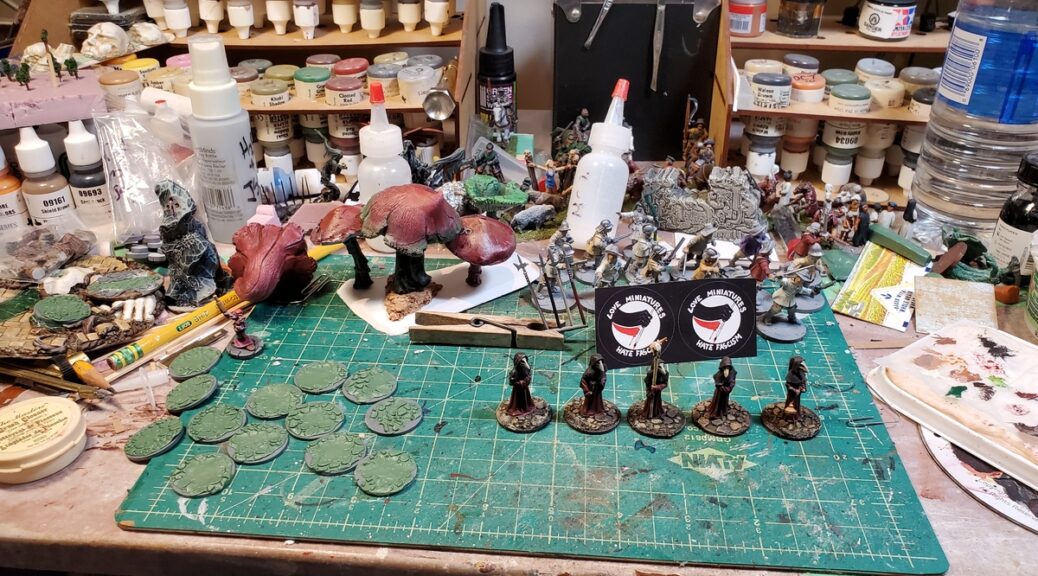 Plague and megalomaniac idiot dictators waging unprovoked war on democracies and idiots honking in stupid pickup trucks… let us distract ourselves with some modelling instead, shall we?

So what was, in fact, on the workbench this weekend? Starting on the lower left of the cutting mat, we have a batch of 25mm/1″ plastic bases with greenstuff cobbles added to the top, these eventually to have some “town watch” kitbashed figures on them – probably Warlord ECW pikemen bodies with Frostgrave parts for some arms.

Heading clockwise, we have some awesome Fenris Games mushrooms, the first I’ve finished from their massive Sporewood set from the 2021 Toadstool Brownie kickstarter. I’ve based four of them onto a chunk of scrap 1/8th plastic and will get that finished up soonish; the fifth mushroom painted is lying on the left there.

At the back of the cutting mat behind the Fenris-supplied “Love Miniatures Hate Fascism” stickers are sixteen Bloody Miniatures English Civil War chaps, their Company of Wolves bundle of their Wave One releases, also from early 2021. Really lovely figures, full of character. Bloody Miniatures has produced two more batches of sixteen since then and Wave Four is on the way; I’ve held off on buying Waves Two and Three because up until a few weeks ago Wave One was still all boxed up…

Finally in the foreground we have five Fenris Games Plague Cultists all finished and ready to terrorize a table soon. Their bases were the test run for the urban bases off to the left there. I wanted grubby urban cobblestones and I think it worked. Nice simple figures full of character, too, and beautifully easy to paint up.

Hobby progress despite the state of the wider world, and that is never a bad thing. Stay safe, stay sane, and hobby onward!