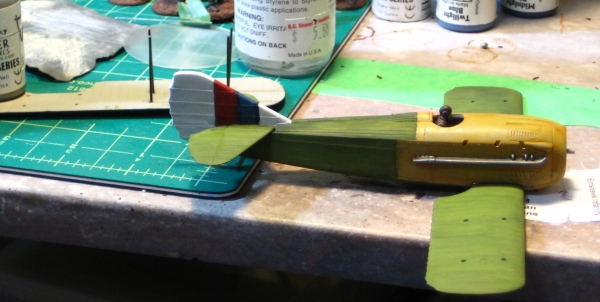 I should be working on finishing White Russian infantry, but I’ve allowed myself to become distracted by aircraft, specifically the SPAD 13 I wrote about a few days ago, earmarked to support my White Russian forces.

Here’s the SPAD all laid out on my workbench. As I mentioned in the first post, these are incredibly basic kits. The SPAD has 26 parts, at least one third of which are wing struts!

The kit needed minimal cleanup as far as flash, molding gates and such went, so after a quick shot of grey primer it was off to the paint racks. I used multiple coats of well-thinned Reaper Master Series acrylics, and always brushed the same way, from the front of the plane toward the back. This gave the body and especially the wings a nice weathered, mottled appearance without having to do a lot of actual weathering. The wings are Swamp Green; the front of the fuselage is Tanned Leather with a wash of GW Gryphonne Sepia; the undersides of both wings are Polished Bone, with a drop of Khaki Shadow in the base coat. The white is Leather White highlighted with Pure White; the red Clotted Red highlighted with Carnage Red and washed with GW Baal Red; the blue is Old Navy highlighted with Heather Blue.

This kit actually has roundels (RAF or French) molded right into the skin of the wings, so doing Russian roundels as used by the Imperial Russian Air Service pre-Revolution and the Whites after was easier than I’d thought it would be. The photo below is the roundels after only the first coat of paint, minimal cleanup and no highlighting.

In the background of the last photo, you can see the clear plastic disc I cut to replace the kit’s prop with a “spinning” prop. I put the disc down on a sheet of 600 grit finishing paper and rotated it around a few times by hand, so it has fairly convincing rotating look to it. It’ll also be a lot stronger than the kit prop.

More to come, I’ve done some freehand insignia on the rudder of the SPAD and of course there’s final assembly of the beast!