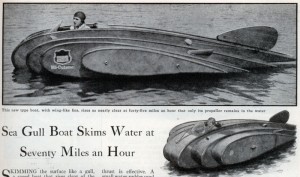 In 1933, according to Popular Mechanics, there was the Seagull, which “…skims water at seventy miles an hour.”

In 28mm resin, in the present day, we have this:

Painted and lightly modified back in 2009 by myself, produced by the eccentric and excellent Tobsen77 from Germany. The paintjob is inspired equally by classic wood-and-white yachts and the gleaming metal of The Spirit of Saint Louis and other 20s/30s projects.

It still hasn’t appeared in a game, actually. One of these days it will, possibly as the one-man escape craft of a dashing-but-dastardly Leader of the Evil Conspiracy. Can’t you just picture it zooming away from a dock, leaving hapless minions and frustrated pursuers equally behind?

(My take on the Seagull has previously appeared on Lead Adventure and elsewhere, but heck, it deserves another moment to itself.)