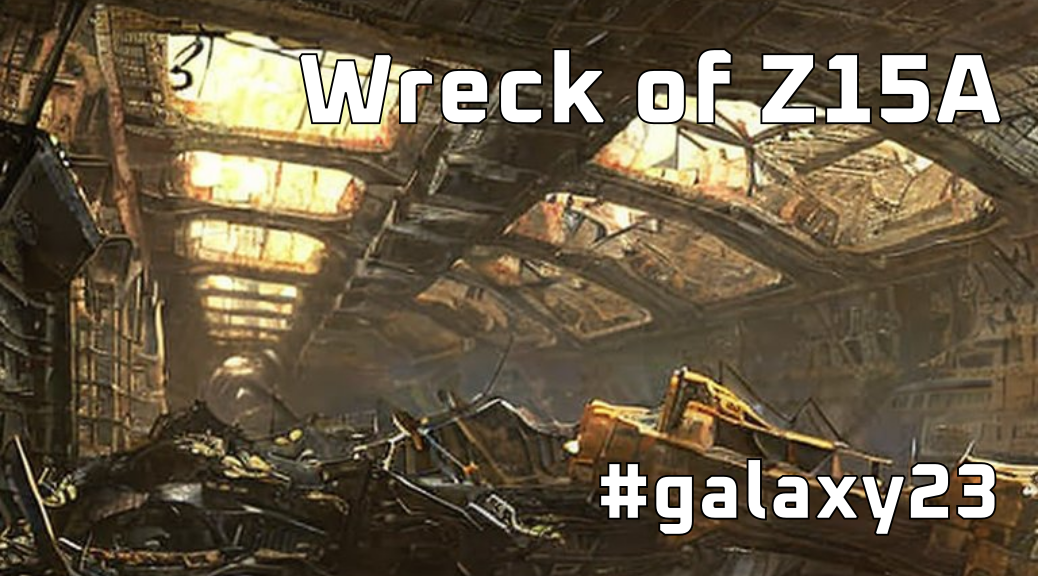 Today we head back to Mephistopheles Cluster and the giant wreck of Z15A. A wrecked generation ship, Z15A is so named because of where it it is – Z sector, 15th quadrant, largest object in that quadrant, according to first Terran survey of the cluster.

Z15A has a number of notable features – it is huge (over 1000km long), it is apparently still sort of working (there is a breathable nitrogen/oxygen atmosphere in parts) and nobody really truly knows who originally built it.

In the thousands of rooms, corridors, bays and other spaces of Z15A, there are several that stand out as noteable.

A massive space in the centre of the ship, the Chi-nith-ra or Great Plain more resembles a slice of a planet than the spaceship it is. Amazingly, this space retains both an atmosphere and heat, so can be walked around without a space suit.

During The Closing, inhabitants of several space stations retreated here as systems started failing on their stations. These humans and other species still squat here, despite all efforts to move them.

There are three distinct settlements within the Great Plain – New Hope is a primarily Human settlement, from the major Solar Compact station as well as few outer colonies. The Halite Commonwealth has formally accepted the small remnant of Qoss and Yishk who live in Britli-kat as part of the Commonwealth, although no other power recognizes their de-facto ownership and control over this part of the ship.

Lastly the reclusive Bredensonee, a large herbivorous species that resembles a bipedal woolly mammoth, have a large settlement in the far stern end of the plain. They are a descendants of a large family ship that was caught in the cluster due to The Closing on its was to a colony world. By far the most numerous settlement (really settlements), the Bredensonee have resisted efforts by their government to resettle them of Z15A, the suspicion amongst the others who live in Z15A is that this settlement is some type of religious order who may have fled to avoid persecution, although neither they, nor the central Bredensonsee government are saying anything.

Running down the centre top of the whole ship, from above the bridge at the front to the large docking bay at the rear, the main concourse is almost all open to space.

A big part of the external parts of Z15A comprise the many docking and ship building bays that befitted a ship of this class. Most of them are empty, possibly when the original inhabitants left the ship, but some are filled with debris and parts of starships.

In the explorations of the ship, nobody has of yet found any intact small ships, but it is possible deeper in some of the bays, beyond the debris piles, there are complete starships.

Robots and other automated beasts

While Z15A is very definitely clear of any of the original inhabitants and large parts of it are open to vacuum, the ship is far from dead. The fusion reactors or whatever power the ship still function and the energy signal is very faintly detectable. Some parts of the ship retain atmosphere and heat, notably the vast inside space known as Chi-nith-ra. There are also a fair number of smaller robots that still function, some of which can pack a fair punch.

The stern end of the port side, beyond some empty ship building bays is an area that is shielded and still patrolled by security bots – armed with fairly primitive but highly effect lasers as well as low-velocity slug throwers. They appear to be guarding room that is approximately 500m cubed. It is on the exterior of the ship, with a large bay door that is similarly shielded and armed. Nobody has successfully entered this area and reported back, although it is possible a stealthier mission might have penetrated the defences here.

Security bots can be found scattered throughout the rest of the ship as well, although most are inactive. They appear near what look like former weapons installations (all removed or destroyed) or in a few of the small craft hangers

Far more numerous are the cleaning and repair bots that function in some parts of the ship. These vary in size from the size of a bread box to large vehicle size, depending on the area. Most of these are harmless, although some malfunction and their tools can be harmful or even lethal.