Well, that was quite a year, wasn’t it?

No conventions, no in-person gaming at all for a good part of the year thanks to our local COVID precautions, and yet things still got painted, finished, and even played with.

Before COVID (Remember That?)

We started the year damp and cold off the 1/1200 coasts of England with a lot of naval gaming and scenery for that, then we were briefly visited by a very strange bartender indeed and got a few games of tiny ships done in-person.

March was when it all went weird. The high point of my own gaming year, Trumpeter Salute over in Vancouver, was cancelled on less than two weeks notice, work-from-home started abruptly, and all sorts of other things went very, very sideways. I did spend some of the money I’d have ordinarily have spent on other things on orders from Bad Squiddo and Forge of Ice, two tiny one-person companies I’ve been meaning to order from for many years now, so that part was nice, but the fact that March/April/May 2020 have fewer blog entries here, combined, than I made in January indicates how off-kilter everything was!

The end of May did see the modification of our local COVID restrictions so that we could have “pods” of up to six or so people, so my brother and a friend resumed gaming most Sundays, starting up a Frostgrave campaign that eventually morphed into a fantasy-flavoured Pulp Alley campaign.

June and July saw something like a normal posting pace resume here as I cranked out a bunch of fun quick fantasy scenery to add to our Forestgrave tables including a standing stone and a big tree. There were also a few impossibly tiny planes as a diversion from fantasy!

August saw a return to naval stuff and small scale scenery, and September saw the arrival of Gaslands on the scene, which has provided much pandemic diversion since!

The last quarter of 2020 saw tightening of our local COVID restrictions and the end of even limited in-person gaming, but before that we did get to see some mad mushroom jungle terrain and some other weird fantasy terrain before we finally turned to that most 2020 of communication solutions, online webcam conferencing, for a Gaslands gaming fix.

So, that was our 2020 here at the Warbard! A weird, stressful, very strange year but here’s hoping that sometime before the end of 2021 we’re back to in-person gaming, conventions, and something vaguely like pre-pandemic normality.

In the meantime, wear a mask, keep an eye on how soon you can get your COVID vaccine, try to get some hobby time in if your situation allows, and stay safe. Happy New Year, I guess! 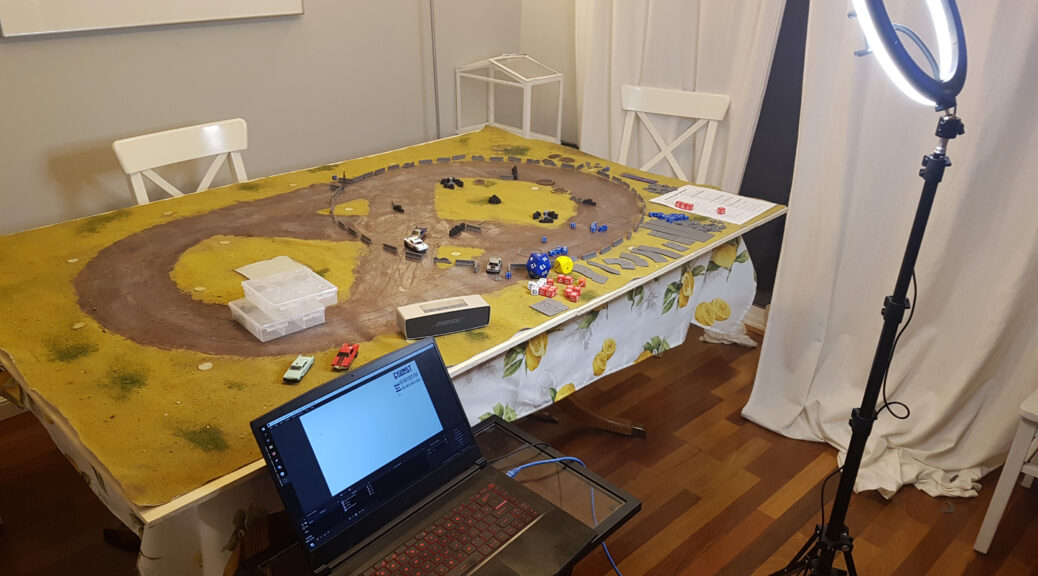 The second wave of COVID-19 is here and with it, new restrictions on in-person events like gaming. While in British Columbia we don’t have a strict lockdown, we are limited to our “core bubble” aka our immediate household. Which means no in-person gaming. Our little gaming group (myself, Brian and our friend Sean) took a break, we wanted to get gaming again and preferably avoid fully-online solutions like TTS. Enter the webcam.

Our first attempt used an ancient webcam that spits out low resolution image, plus using Gotomeeting. I shared my screen, which had the default Windows camera app up on this. It worked, but was very difficult to see.

We were also challenged with how to track stats – gear, hazards, damage, etc. Brian tracked it on his computer and I tracked gear phase and hazards on the gaming board. Neither really worked – we couldn’t see what Brian was tracking and due to the webcam, nobody could see the hazards I’d placed on the board.

Having tried the old webcam and realized it didn’t work, plus the need to track stats, I decided to download and play with OBS Studio. I figured I could overlay a Google sheet to track stats, plus bring in the camera feed.

To deal with the poor image quality, I downloaded #LiveDroid, an Android app that streams your phone’s camera over a local server. To help with low light, I used my new ring light that my wife had bought me for Christmas.

OBS is pretty easy to setup – this was my first attempt at using it and it ran flawlessly. I had four different sources: cam link from phone (as a browser source), read-only Google sheet (as another browser link), white image for a background and the Esquimalt Thunderdome branding image. Note that I didn’t run any audio through OBS, as we were talking via Discord.

For stats via Google sheet, I first setup the needed columns and then cropped the source down using a Crop/Pad Effects Filter to only show the key part of the stats. This method is easy to change on the fly, which we did when I forgot to add Gear Phase to the initial sheet.

Streaming from your phone

I downloaded #LiveDroid, a free Android app that streams your camera to a browser on your local network. You will need to set the resolution for both the camera and in OBS. I set the phone to be 1920×1280 and the OBS source to 1280×960. For me, Camera 0 was my rear camera.

I also tried DroidCam, which has an OBS plugin, but that stuck an ugly watermark on the image.

Connecting it all together

Finally, I shared the OBS window out using a virtual webcam. On the bottom left of the OBS window, it is labelled Start Virtual Camera. We then started a video call in Discord and I changed my webcam source to OBS Virtual Webcam.

If you’re the presenter, don’t be alarmed when your webcam looks like this:

But for everybody else, the combination works well. This was Brian’s view of the final hit of the game.

Modifying Gaslands to play via webcam

For those playing remotely, the hardest challenge is spatial sense. A lot of Gaslands is about choosing the right template. Also, play will be slower, so plan for that.

The touch it, use it and no pre-measuring rules from Gaslands assume you have a good view of the table, which remote players really don’t. So we changed the template rules a bit. They could ask me about what a template would look like and sometimes I would even lay it down after they’d described what they wanted to do.

Keeping the cars and game simple

In order to keep the game from bogging down, we decided to institute a few simplifications to the game:

Have a record keeper (and track stats locally and remotely)

The person moving the cars and running the feed doesn’t have the time to deal with record keeping that others can see. So we ended up tracking the key stats both on the game board (so I could see them) and in the Google sheet. So Brian, sitting at his computer, could track the stats for everybody, leaving me free to move cars and keep the game moving

Be ruthless about whipping people along

In order to complete a game, you’ll need the person who is moving the cars to be a ruthless GM. They need to keep the game moving via ensuring each player moves, constantly asking all the key questions like “How many dice do you want to roll”.

Overall, the second game ran really well. OBS made it a lot simpler for everybody to see all the stats.

One of the key problems we ran into was seeing the dice. Instead of an online dice roller, I rolled everybody’s dice in person. For the next game, I plan on using the crappy old webcam as a dice cam – set it up vertically over a dice rolling box.

I also need to play with the colour balance, contrast and saturation of the webcam. Unsurprisingly, all the various pieces of software being used tried to do some sort of correction and not all of it worked.

Where to get the software

OBS is free and runs on most major OSes, while #LiveDroid is Android-only.

It’s the pandemic. We can’t meet in person, we can’t meet in each other’s houses, the university and board game cafe we sometimes use locally to host games are all closed for that sort of thing. What’s a gamer to do to get their fix?

Zoom, zoom zoom… and I’m not talking the Gaslands cars, but of course webcams. Gaslands is especially good for webcam gaming, it turns out, as all movement is template based and there’s relatively few stats per car to track.

Corey has promised to write a more technical post here in the next while on the setup at his end as he hosts and runs these games, but the most recent game used Discord for the video feed and voice chat with some OBS voodoo at his end for the game table feed and Gaslands stats tucked into a Google Docs spreadsheet.

From my end, it looked something like this. Well, from the cat’s perspective, that is. (If Cat is your copilot, you shall fear no hairball!)

We actually got three games done in about two hours in as we were only running one car each and the Death Match arena setup (last person standing) is pretty straightforward.

With Discord for voice chat and the OBS integrated video feed it worked out really well for Gaslands.

The ending of our third game featured the most spectacularly destructive head on collision we’ve seen yet. The screenshot below captures the dice rolls; the left hand pile of ten (!) damage was what I did to Sean, and he in turn did seven points to me, destroying both of us and leaving Corey the overall winner, best of three games!

There’s a few other games we think would work well with this basic setup; the current GW airplane game being hex based and having simple maneuvers would be one, as would some of the naval games that have written orders with templates, although there’s more recordkeeping for that sort of game.

Hope everyone has been having a good, safe holiday season, however you celebrate, and that you’re able to get some sort of gaming fix in somehow!